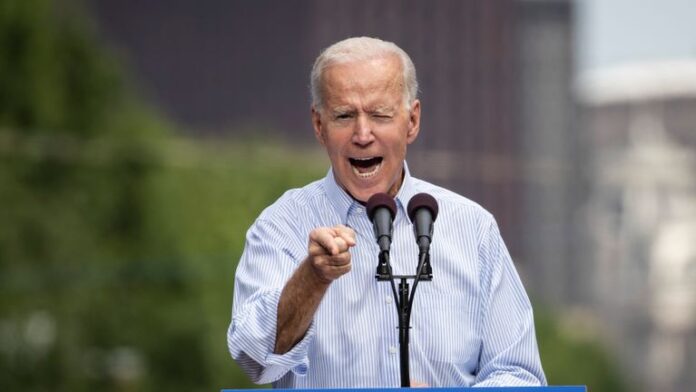 Democratic presidential candidate Joe Biden’s is now leading President Donald Trump with 17 points as the US election enters its final sprint, according to Opinium Research and Guardian opinion poll.

The survey shows 57% of likely voters rooting for Joe Biden while just 40% say they will vote for the incumbent president.

The 17-point gap is even bigger than than 57%-41% margin found by CNN earlier this month, just a little short of the lead in the popular vote that Ronald Reagan enjoyed in his second landslide victory in 1984.

The former vice-president now leads on healthcare, race relations, jobs and even the economy (45% to 43%), usually seen as Trump’s signature issue.

With barely three weeks to the November 3 elections, some Republicans fear a rout in the races for the presidency, Senate and House of Representatives.

Asked by the Times if Trump can still turn things around, Rollins replied: “It’s cooked.”

Opinium’s findings for the Guardian suggest that a hectic month that saw the death of the supreme court justice Ruth Bader Ginsburg, Trump’s disastrous debate performance and a White House outbreak of coronavirus that infected the president himself swung the pendulum decisively in Democrats’ favour.

Biden has gained five percentage points among undecided voters since September. Democrats also injected momentum into existing supporters, with voters for Biden now more likely to turn out, up from 75% in September to 82% this month.

Trump’s reputation as a successful businessman took a big hit from a New York Times investigation into his tax affairs, which reportedly reveals years of tax evasion and fraud.

The research also exposes some key differences from the 2016 election when Trump edged out Hillary Clinton in the electoral college.

Both Trump and Clinton were historically unpopular. 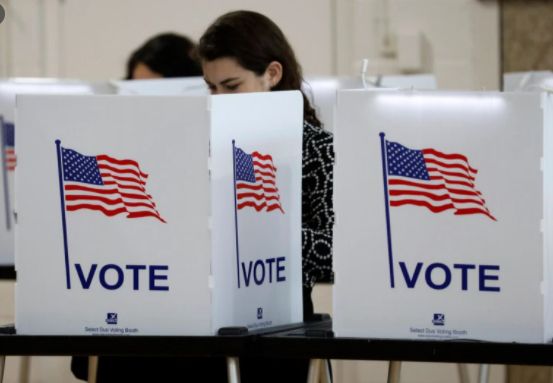 Clinton also fared poorly on sexism-charged questions of “likability” and which candidate would voters rather go for a beer with. But in 2020 voters say Biden is more likable than Trump by a 57% to 32% margin.

And whereas Trump’s “Crooked Hillary” label and allegations seemed to stick, his attempts to portray Biden as mentally unstable appear to be falling short. In fact, voters say Biden, 77, has better mental stamina than 74-year-old Trump by a 48% to 44% margin. 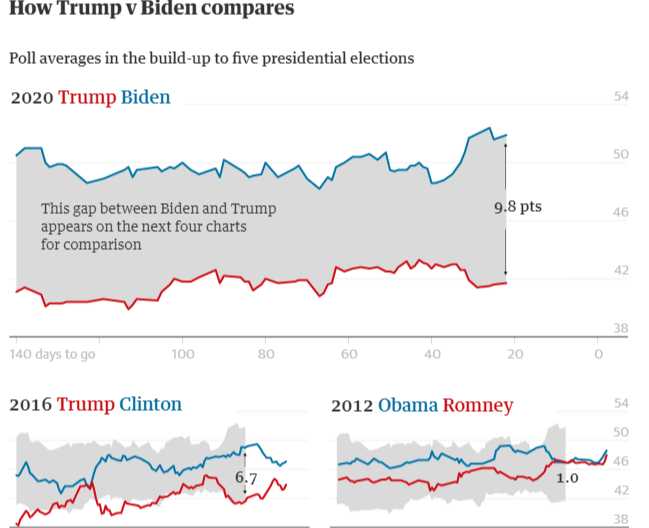 Opinium surveyed 2,003 US adults aged 18 or over from 8 to 12 October. Interviews were conducted online and sampled and weighted to match the demographics of the US adult population as well as factoring in education level and past vote in recent elections.

Trump’s core support is notoriously loyal, and still turning out at his resurrected campaign rallies, but there is evidence of some Americans turning against him, even in battleground states such as Michigan, Pennsylvania and Wisconsin.

Nearly two in three (62%) of ex-Trump voters (who voted for him in 2016 but will not do so this year) say his handling of the coronavirus pandemic is the reason they switched their vote. In addition, almost half (47%) of ex-Trump voters say his personality and behaviour contributed to the switch.

Democrats have said a massive victory is the surest way to avoid lengthy legal disputes that could even spill over into street violence. Trump has spent months seeking to undermine the credibility of the election in general and mail-in voting in particular.

Trump Makes Voter Plea To Suburban Women: ‘Please Like Me’