China has become the second country in the world, after only United States, to plant its national flag on the moon.The pictures from China's...
Read more
Home News Uhuru-Ruto Camps Clash Over Push For Reconciliation
NewsPolitics
October 15, 2020 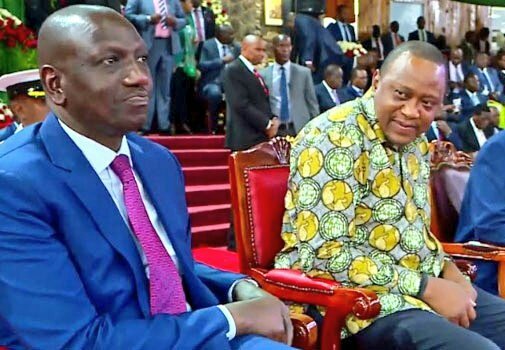 Tangatanga has dismissed any attempts to reunite their boss,Deputy President William Ruto, with the President Uhuru Kenyatta, with rivals claiming that truce is pure imagination.

Instead, they want his status as a functional deputy president who chairs Cabinet sub-committees, among other roles, to be fully reinstated before he can commit to a ceasefire.

After Sonko News reported yesterday that two religious leaders were leading the drive to reunite the once ‘dynamic duo’, leaders convened at the DP’s Karen residence and resolved to rebuff current and future reconciliation attempts until certain conditions are met.

“We really do not see anything meaningful that will come out of it. We have lost our jobs, we have been taken to court, we have been sacrificed and in all these, the law was circumvented,” one of the attendees said.

Mr Murkomen said they wanted the President to have the basic courtesy, adding that it was not too much to ask. He added that they were not asking the President to support Ruto, but to be a leader and lead the country in good faith.

“Forget the truce. What we are asking for is simple: respect the DP and his office. Let him restore Ruto’s duties and ask the juniors to behave with decorum. That is what we are requesting. A political handshake is not our priority now,” he said.

Kiharu MP Ndindi Nyoro said they were not interested in a truce because it would not add value to their team. “Why now? We will soldier on as it is. They know their strategies are not working.”

Nandi Senator Samson Cherargei said the horse had bolted. “We are not interested in political truce.”

The reconciliation talks were also repudiated by leaders in President Uhuru Kenyatta and ODM leader Raila Odinga’s camps, with Jubilee vice chair David Murathe saying they were a figment of Tangatanga’s imagination.

“Kindly disregard their propaganda. The President is busy serving the nation and those claiming that there is a planned truce are talking to themselves,” said Mr Murathe.

Nominated MP Maina Kamanda said that while there was no problem in talking, no one on their side could trust Ruto as long as he harboured ambitions of becoming the country’s fifth president.

“The Ruto group is trying to use the truce talks to slow down our support for Raila. We are telling them that we cannot be distracted. With the way Ruto is disrespecting the President, who wants to associate with him?” said Mr Kamanda.

Mr Mbadi said any conversation would have to be brutally honest. “There is no two ways about it. The person leading the reconciliation talks should either tell Uhuru to abandon his peace and unity agenda of the country and help Ruto’s selfish 2022 presidential campaign or tell Ruto to stop early campaigns and help in service delivery.”

The ODM party chairman said Uhuru’s handshake with Raila was aimed at uniting the country and any attempts to scuttle the peace were selfish pursuits.

Mr Kaluma said it is Ruto that sought peace and reconciliation, and not the other way round. “How do you reconcile a person with his boss? Ruto should get it out of his mind that he is some co-president. He is not. As the deputy president, he should and must respect the President.”

According to Kaluma, ODM’s political strategy was not dependent on Ruto’s relationship with Uhuru.

Mr Kutuny denied knowledge of any truce process but admitted that the animosity between the two was real.

Mr Momanyi said any truce between the two leaders would not affect the political strategies already in place, but warned the DP to respect his boss.

It also emerged that some of Ruto’s allies feared that committing to truce talks would put them at a disadvantage because they would be negotiating from a point of weakness.