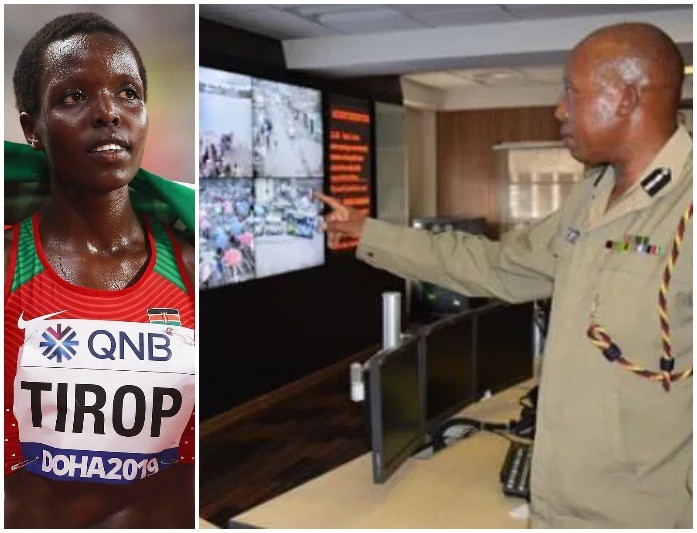 Emmanuel Ibrahim Rotich didn’t act alone in the murder of Agnes Tirop, CCTV footage has provided police with clues how the slain athlete met her end.

Detectives from the Directorate of Criminal Investigations (DCI) have so far arrested three suspects linked to Tirop’s murder.

Tirop’s estranged lover Emmanuel Ibrahim Rotich, and his friend John Kipkoech Samoei – who drove the late athlete from a training camp to her house in Iten where she was later found dead last week – were the first ones to be arrested.

The third suspect arrested in connection with Tirop’s murder is a woman. She was apprehended after CCTV footage showed she was at the slain athlete’s home before her lifeless body was discovered.

Keiyo North sub-County Police Commander Tom Makori confirmed the arrest of the woman but declined to disclose her identity.

“There was an unidentified woman who was spotted at the slain athlete’s home a day before her body was discovered. Detectives have had statements from multiple witnesses including friends of the two, which have aided our investigation. Positively identifying the woman won’t be an issue,” explained Makori.

“Now that more people including the prime suspect have been arrested, they will assist in exposing images on the CCTV cameras and facilitate conclusive investigations.”

Detectives believe Emmanuel Ibrahim Rotich was aided by the two other suspects in the killing of Agnes Tirop.

Police are now reviewing the CCTV footage obtained from the slain athlete’s house for more clues into her final moments.

“The detectives are analysing a raft of items we have in our possession and we are making steady progress in the matter,” Makori said.

According to Makori, the prime suspect Rotich has since been transferred from Mombasa, where he was arrested and he is being held in one of the police stations ‘in the vicinity’ ready to appear in court.

“All the loose ends are being tightened and we shall not leave any stone unturned. The woman who was spotted in the athlete’s home a day before the discovery of the body is giving us leads. And now that the prime suspect is in custody, we are going through all the items we have in our possession before concluding the investigations,” said the police commander.

Related: Another Athlete Edith Muthoni Stabbed To Death By Her Boyfriend After Agnes Tirop Murder