First African Catholic Bishop of Meru Silas Njiru could be buried in 2035 at the St Joseph Cathedral in Meru town.Bishop Njiru, who died...
Read more
Home News Some of the the key changes to political system in the BBI...
News
October 21, 2020 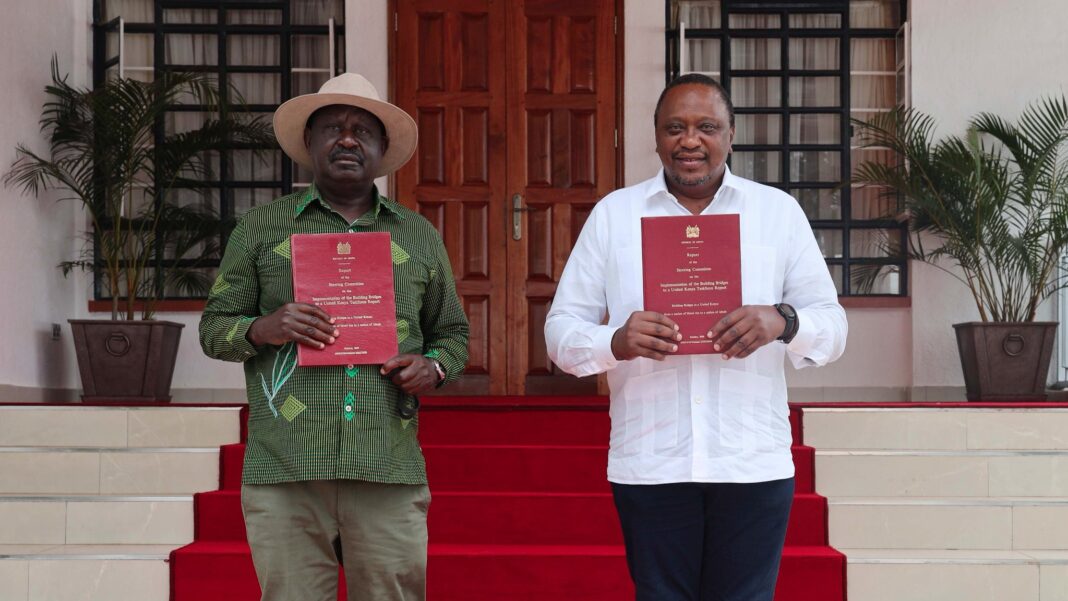 The document has been touted as the blueprint for Kenya’s journey to peace, unity and prosperity and a country devoid of ethnic-based politics and its trivialities.

Here are some of the document’s key proposals:

Stakeholders submitted that the new executive structure, being more inclusive, will not generate the same bitterness and tension as we see when the fight is for the position of the President,” the report says.

The PM’s duties shall be to:

(a) be the leader of government business in the National Assembly;
(b) oversee the legislative agenda in the National Assembly on behalf of government;
(c) supervise the execution of the functions of ministries and government departments;
(d) chair cabinet committee meetings as assigned by the President;
(e) assign any of the functions of the Office to the Deputy Prime Ministers; and
(f) perform any other duty assigned by the President or conferred by legislation.

The president can hire or fire the PM at will. The PM can also lose their job through a successful motion of no confidence in Parliament.

The President will also pick the Deputy PMs from among the Cabinet Ministers.

So will the post of Deputy President, currently occupied by William Ruto, go? According to the report, no. This post will be retained, making for an expanded, top-heavy executive.

The report proposes that the Constitution be changed to introduce a new House power structure that includes the PM, Deputy PMs and the Leader of Official Opposition, the latter being the runner-up in the presidential election.

This will be the new power structure in parliament, in order of precedence:

The BBI report proposes that Cabinet Secretaries revert to being called “Cabinet Ministers”. The Ministers can also be picked from among members of the National Assembly.

Should a Minister become lucky enough to be named Deputy PM, his/her duties will include deputising the PM in his/her duties and essentially doing whatever the PM asks of them.

The Haji-led team reckons that the judiciary’s accountability to the Kenyan people is not enough. To this end, it proposes the establishment of the office of the Judiciary Ombudsman. This independent officer will be nominated by the president and, when approved by Parliament, sit on the Judicial Service Commission (JSC).

The job of the Judiciary Ombudsman will be to receive complaints about judges, magistrates, registrars and other judicial officers. The ombudsman will also have the power to conduct inquiries into them, and submit periodic reports to the president and parliament.

“The qualifications for appointment as the Judiciary Ombudsman are the same as for the appointment as a judge of the Supreme Court,” the report notes.

“The Judiciary Ombudsman shall hold office for a single term of five years and is not eligible for re-appointment,” it adds.

The report proposes changes in the management structure of the Independent Electoral and Boundaries Commission (IEBC).

“The taskforce recommends that we go to the next election with a clean slate to strengthen faith in the IEBC,” it says, meaning that it is proposing that the current crop of commissioners exit before the 2022 General Election.

The report also proposes that all current senior IEBC officers be vetted. Additionally, it recommends that all IEBC staff be employed on a three-year contract, and that this only be renewed once on condition that their performance was good.

The taskforce also recommends a change in the hiring process of returning officers to make it more rigorous.

“Returning officers should be hired through a similar process to the one used for commissioners, with the involvement of public participation.”

Among winners of the BBI report’s proposals are healthcare workers. The taskforce has proposed the creation of the Health Services Commission, an agency that will be tasked with making recommendations to government on the management of medics.

The proposal is a win for health workers since they, through the Kenya Medical Practitioners, Pharmacists and Dentists Union (KMPDU), have been lobbying for its creation in order to remove some health functions from county governments.

They want functions such as recruitment, deployment and discipline of medics to be handled by the Commission. 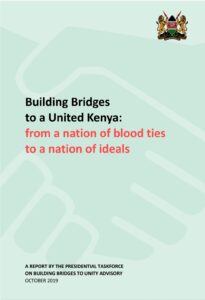 According to the report, Kenyans recommended several measures to tackle graft cartels, including:

a) Speedy prosecution and conclusion of cases involving corruption and criminal wastage of public resources.

b) Stiffer sentences and punitive fines for all found culpable of corruption.

f) Digitisation of all government services, which will not only help curb corruption but also bridge the gap in accessibility of services to historically marginalised and sparsely populated counties of the country.

g) Regulatory oversight of escrow and nominee accounts held or managed by professionals on behalf of their clients.

h) Full implementation of the Bribery Act in addition to adoption of measures to prevent and curb corruption in the private sector.

i) Accountability mechanisms to be put in place to monitor, on a regular basis, those given the duty and privilege of accounting for public resources.

j) Laws that compel the disclosure of the beneficial owners of corporate entities where such entities are under investigation for corruption and other crimes.