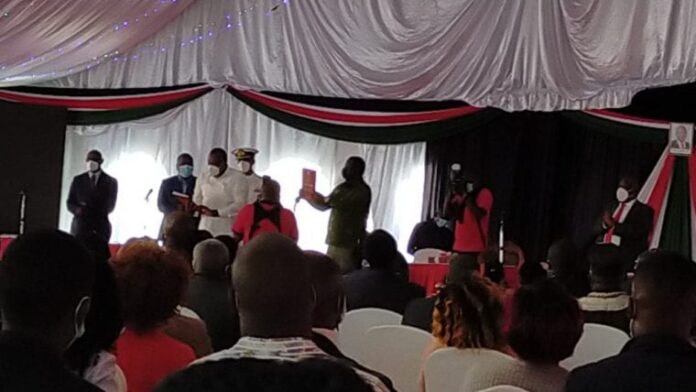 Deputy President William Ruto made no show at the event. Instead, the DP graced the burial of Huruma MCA Peter Chomba, who died from Covid-19 related complications.

Reporters present at the event were asked to refrain from taking pictures and switch off their phones until the report was unveiled.

ODM leader Raila Odinga noted that there was wide consultation on the document.

“We had to find a way in this Constitution to isolate problems affecting the minorities and find a way of addressing them…from sharing of resources to land rights, infrastructure, minorities, management and value addition to resources,” he said.

“You have been around all along, is it now that you have discovered the mkokotenis (wheelbarrows)? If you are really concerned why can’t you give them your helicopter?” he said.

“You didn’t drop from the heavens…you are not an angel,” he added.

Raila said the BBI report was not about creating positions for a few people, terming the rhetoric as propaganda.

“We are certain we shall find a consensus. We are determined to achieve that before the next General Election. It’s not about making Odinga president or Uhuru PM. That’s propaganda,” he said.