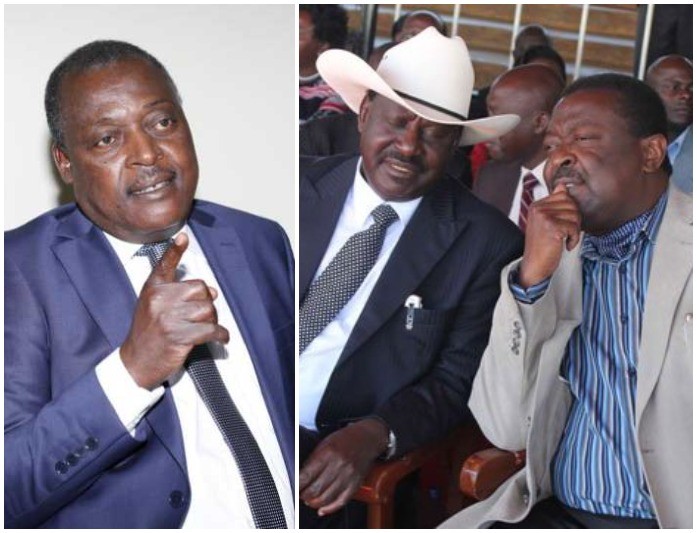 Cyrus Jirongo who is allied to Musalia Mudavadi has now asked the Amani National Congress (ANC) leader to shelve his presidential ambition in support of Raila.

Mudavadi and other One Kenya Alliance (OKA) co-principals insist they will be on the ballot in 2022 though it’s now clear the presidential race is a two-horse race between Raila and Ruto.

In an interview with vernacular radio station Mulembe FM, Jirongo cautioned that there are spies in Mudavadi’s camp who are Ruto’s allies whose duty is solely to attack Raila.

Jirongo maintained that members of Mudavadi’s ANC party who are solely insulting Raila are working with Ruto.

According to Jirongo, these people talk ill of the former Prime Minister in Western region but do not attack Ruto who has a far worse track record in as far as corruption is concerned.

The UDP leader explained that that attacks on Raila by ANC members are aimed at making Ruto popular in Luhya nation where Raila enjoys enormous support.

Jirongo further called on Mudavadi to stand with Raila since he has worked with them before and can easily back one of them unlike Ruto who will never step down for the ANC leader.

“Raila is a neighbor and an older man who we have worked with. He is more of a team mate who can easily endorse and support one of our own as a presidential candidate as opposed to Ruto, who is unlikely to do so,” said Jirongo.

Jirongo’s sentiments came as Kakamega senator Cleophas Malala and nominated MP Godfrey Osotsi have both accused each other of being Ruto’s moles in ANC.