I Am Now Equal To Uhuru – Sudi 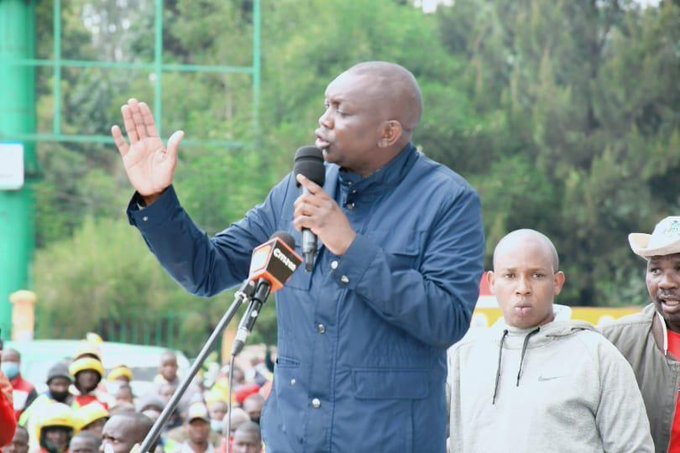 The defiant Kapseret MP Oscar Sudi on Friday while addressing a public meeting in Eldoret said he was now equal to President Uhuru Kenyatta who responded to utterances.

Sudi said the President had responded to the utterances he had been accused of making to incite Kenyans against the Kenyatta’s.

“Yesterday President Kenyatta responded to what I had said and we are now equal. That debate will not end there but I will continue to speak out my mind just like other Kenyans should do,” said Sudi.

Sudi who was addressing a sizeable crowd in Eldoret town insisted that he was not an inciter.

He said he would not be intimidated or cowed to stop speaking out his mind.

The vocal lawmaker insisted he would not be intimidated or cowed to stop speaking out his mind.

The out-spoken legislature also thanked the police for allowing him to address the meeting but warned that they should not allow anyone to intimidate or harass political leaders.

Sudi who also spoke extensively on graft accused the government of misleading people on the Covid-19 situation while allowing some individuals to steal public funds in the health sector.

Sudi wants President Kenyatta to ensure the arrest of those involved in the grand theft at Kemsa and the Ministry of Health.

“Let them not try to divert us from the Kemsa debate because we will speak out until the truth comes out. They have been telling us to wash our hands and stay at home yet Covid-19 is fake.  All they wanted was to steal from KEMSA,” said Sudi.

The MP noted that that country belonged to everyone therefore some leaders should not consider themselves more important.

“I talked out after they arrested my colleague Ng’eno but they should have first arrested the likes of David Murathe and all those corrupt people before going for the Emurua Dikir MP and others,” said Sudi.

He said leaders allied to the Deputy President had been either sacked or sidelined in government but warned those responsible to go slow to avoid causing problems in the country.

RelatedSudi Takes Over Eldoret by Storm, Thousands Turn out To Meet Him

Comedian Mulamwah Shares His Experience As A Trained Nurse