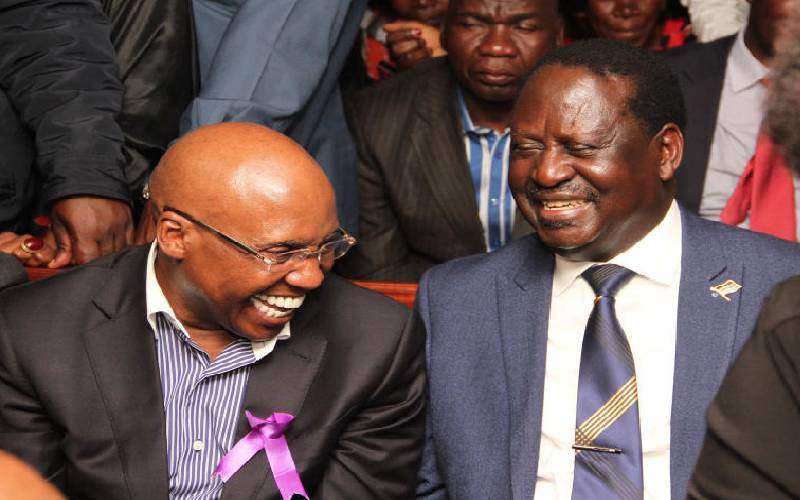 The ODM leader has of late mesmerized people with his call that he would give Ksh6,000 to youth when he ascends to power next year.

Speaking in Kerugoya Kutus, the business mogul termed the promise by Odinga as being economically unviable.

He further said that by giving the youth Ksh6,000, the ODM leader would be doing a disservice to other working Kenyans who have been making a living out of their sweat.

The businessman posed that if there are about 4 million unemployed youth in Kenya, as they say, it then means that the government will be spending a whopping 300 billion shillings per year to carter for the proposal being fronted by Odinga.

Wanjigi advised that what Raila should be doing is to push for the full implementation of the National Social Security Fund Act that carters for the empowerment of the unemployed to get jobs.

The law was passed in 2013, and the government is yet to operationalize it.
The business magnet reiterated that he would be on the ballot come 2022, but only pleaded with the ODM party to conduct free and fair presidential nominations so that a better candidate to emerge as the winner will be the one who will have won fairly.

He said that his agenda would be to empower Kenyans and that he would push for the agenda during his nationwide campaigns.

“My agenda is to empower Kenyans by showing them how to make money,” said the businessman. He was speaking during a church service in Kerugoya Kutus, Kirinyaga County.

Barely a month ago, Raila’s ally-turned foe was given a sour welcome in Migori (an area perceived by many as Mr. Odinga’s stronghold) when he was in his usual campaigns in former Nyanza Province.