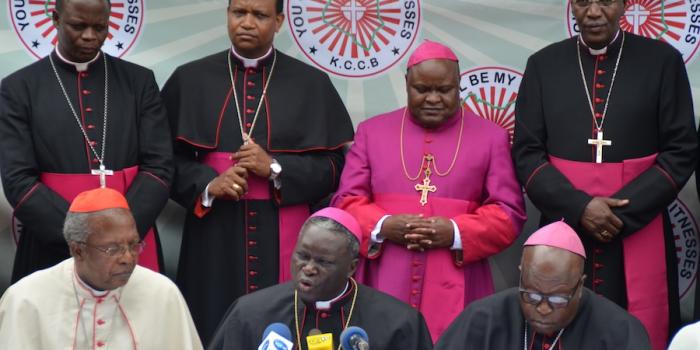 Catholic bishops have decided to follow the Anglican footsteps in banning politics in church during masses.

Speaking during a press release, the bishops said that politicians will only be allowed to attend masses as worshippers.

“And in special consideration given to him or her to propagate his or her political agenda nor address the congregation in our places of worship,” they said.

Aside from that, the bishops raised concerns over the differences between president Uhuru Kenyatta and his Deputy President William Ruto saying that their fall out is posing danger to the prevailing peace and tranquility in the country and cannot be taken lightly.

“We are deeply concerned that if this open disagreement…is taken up by their supporters, the trickle-down effect it could generate across the country will be dire to even contemplate,” they said.

They further urged national agencies to check on utterances and attitudes that might cause violence in the coming elections.

“It is thus imperative that institutions like the National Cohesion and Integration Commission, IEBC and security agencies begin to map out hot spots and violence instigators and counter them peacefully in good time and within the confines of the law,” they stated.

Concerning the never ending violence in Laikipia, Marsabit and Kerio Valley – along the border between Baringo and Elgeyo Marakwet Counties, they urged the government to help in restoring normalcy in the regions.

“On behalf of the people whose lives have been shattered, property destroyed and their perception of Kenya as a Country of peace ruined, we urge the Government to extend full support to them to enable them to reconstruct their lives,” they urged.