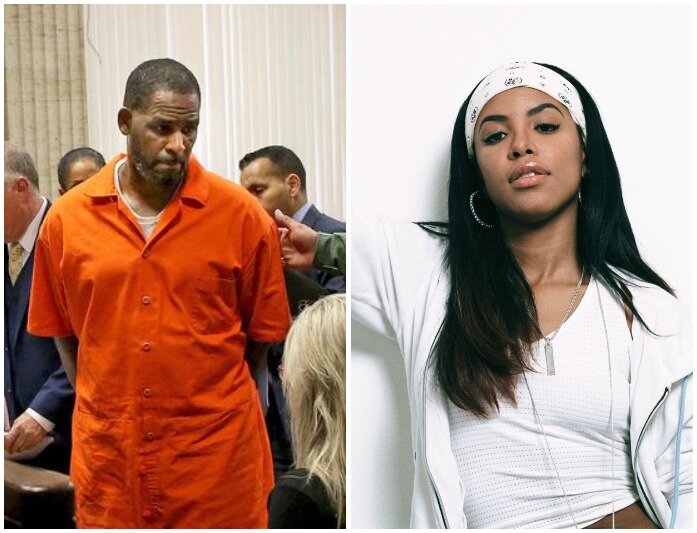 R. Kelly’s background dancer who testified against him in court narrated how the disgraced crooner sexually abused late singer Aaliyah when she was only 13 years old.

The background dancer whose identify was concealed told the court on Monday September 10th that R Kelly started having s3x with Aaliyah when she was still a minor in the early 1990s.

The witness narrated how she walked in on R Kelly performing oral s3x to Aaliyah during one of their music tours.

Kelly’s former background dancer told the court that she slightly opened the door and saw the accused and Aaliyah in a sexual act.

Describing what she saw, the witness said R Kelly’s head was in between Aaliyah’s legs while he was on his knees.

The witness further told the court that she immediately closed the door behind her and never talked to R Kelly about the incident.

R Kelly married Aaliyah in 1994 when he was 27 and she was 15 in order for her to get an abortion. His former tour manager admitted to bribing someone he knew at the welfare office to obtain a fake ID for Aaliyah to marry Kelly.

R. Kelly’s former background revealed that she was introduced to the singer when she was 14 years old and that he had sexual intercourse with her that very day.

She said Kelly asked her to climb on top of him and she paused initially because she was terrified but did as she was told.

The witness further testified that R Kelly had intercourse with at least three other girls who were present when she was introduced to him.

She told the court that she was invited back the following day and saw R Kelly every day for quite a few years until she was at least 17.

The witness, who was an aspiring singer then, said she spent a lot of time with R Kelly either at his apartment or at a studio in Chicago. She said she stopped going to school when Kelly gave her and a few other girls an ultimatum to either sing or to go to school.

She began touring with Kelly as a background dancer in 1992. She said that although she didn’t want to have s3x with the pedophile singer, she felt like she had to.

“He told us we had to pay our dues. It was a requirement to come around,” the witness told the court adding that R Kelly told her and other girls to recruit more girls for him.

The witness said she stopped working for R Kelly in the mid-1990s. She said that she would still see him sometimes afterward when she started dancing for Sparkle, Kelly’s former protégé.

R. Kelly’s former background dancer is the 10th witness to testify against the disgraced singer in his trial which is taking place in Brooklyn, New York.

Related: R Kelly was attacked in prison after guards ignored him