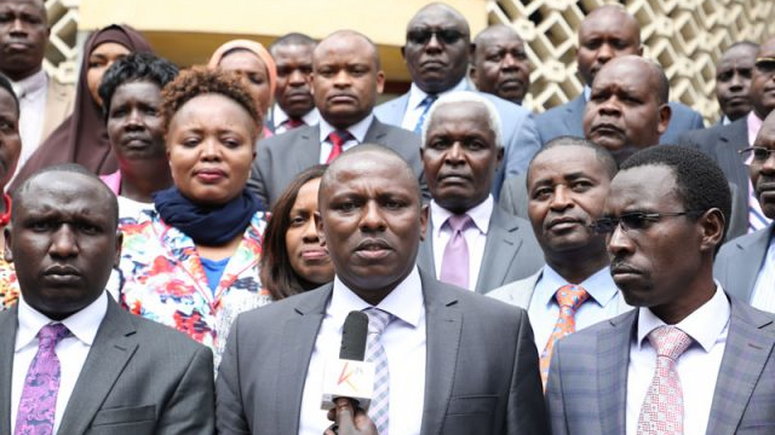 Stung by President Uhuru Kenyatta’s fangs in both houses – National Assembly and Senate, Deputy William Ruto allies are trying to hit back.

The Jubilee MPs are planning to frustrate the government business in both houses as a way of getting back at the president after being removed from various positions.

And once the Covid-19 measures are lifted, the MPs are planning to hold numerous rallies in their strongholds to protest their outer. They are pushing for reopening of churches as they hope to use the pulpit to criticize the government.

Ruto’s allies are also planning to frustrate all decisions made against the leaders in the court of law. According to our sources, the leaders have little hope of overturning the party’s decision but they will use the court cases to embarrass President Kenyatta.

“These are options that we are considering and they will be firmed up soon in a meeting we are organizing,” one of the politicians said.

Senator Kichumba Murkomen (Elgeyo-Marakwet) and his Nakuru counterpart have moved to the high court to challenge their removal. The two argue that the quorum required to make the changes in the Senate leadership was not reached.

“Let everyone know that we shall continue fighting for the cause we believe in. This is not the last time you’re seeing us,” Ms. Kihika said.

Belgut MP Nelson Koech said the MPs allied to Ruto were aware that the changes in the houses were the first step in the President’s plan to tame them, but he took issue with how it was conducted, terming it ‘unacceptable’

“The President is perpetuating illegalities, which have continued to take place in the party from the National Management Committee changes. He is now taking illegality to Parliament, which is wrong because Parliament is an independent body, not an appendage of the presidency. The President has declared war on the sovereignty of Parliament,” Koech told the Nation.

The DP’s allies are planning to use their numbers to scuttle the government agenda on the floor of Parliament.

Keiyo South MP Daniel Rono said the war had just begun and they will use their numbers in both Houses to shoot down any government agenda in its entirety due to what the President had begun doing to those perceived as pro-Ruto.

The problem the DP Ruto’s side has is the lack of numbers in the National Assembly. Jubilee has a total of 171 MPs in the House and out of them DP Ruto control just half of them. But with Kanu and ODM in the mix the equation changes.

Mr. Javas Bigambo, a political analyst is of the view that the changes effected by President Kenyatta show the reason he went into partnership with Kanu and ODM.