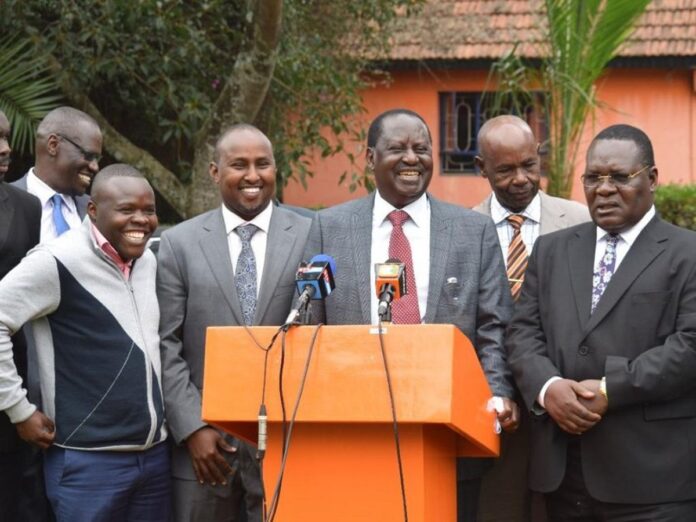 Speaking during the swearing-in of the new National Election Board on Thursday at Orange house, Nairobi ODM party leader Raila Odinga said ODM was a government party.

At the ceremony, Raila said ODM was both a government party at the same time an opposition party.

“Today we are an opposition party and at the same time a government party,” said Raila.

Raila explained that his party was a government in the sense that it heading 16 devolved units and there were more than 16 county assemblies that ODM enjoyed the majority.

“Government in the sense that we run 16 county governments and there are more than 16 county assemblies where we also have the majority. In that sense we are also a ruling party,” Raila explained.

According to Raila due to the large number that the ODM party has and the possibility of discipline cases arising it was important to have the disciplinary committee deal with them in case they arise.

The new members that Raila has brought in include the former commissioner in the Constitution Implementation Commission Catherine Mumma as the new NEB boss.

Others that were brought in are former Wajir South MP Abdulahi Diriye, Richard Tairo, Syntei Nchoe, and Emily Awita.

City lawyer Fred Athuok will be replaced by Prof Ben Sihanya as the chair of the disciplinary committee.
The new blood in the panel are Mumbi Ngaru, Seth Kakusye, Ramadhani  Abubakar, and Dr. Florence Omosa.

Reports say that Raila opted for Mumma appointment following her extensive legal experience to implement far-reaching recommendations of the team that conducted an internal audit last year – with devastating conclusions.

Mumma chaired the five-member team that gave a cruel verdict on various party organs such as the NEB accusing of plotting poll violence to rig in their preferred candidates.

The new NEB members are expected to plan and conduct the party’s much-awaited grassroots elections which had been postponed because of the coronavirus pandemic.