More
HomeNewsViral Video Of Cheating Ghanaian Couple Who Get Stuck While Making Out... 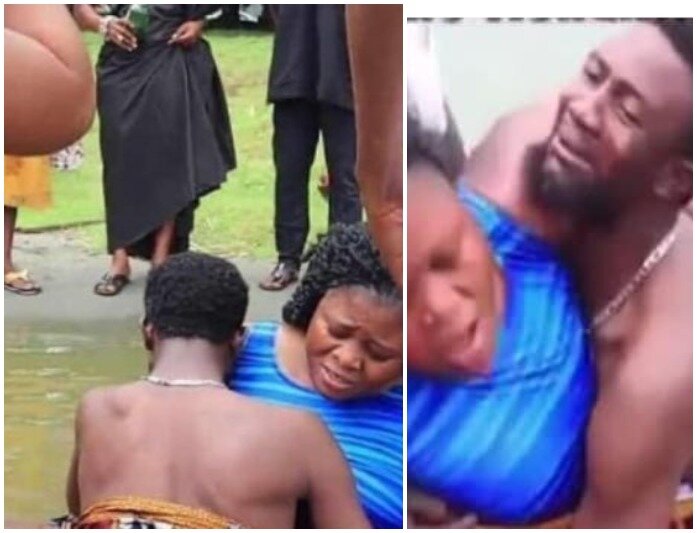 It was pain and shame galore for a Ghanaian couple who decided to have intercourse in broad daylight in Lake Bosomtwi only for them to get stuck and attract a huge crowd.

The cheating pair went for a swim together in the lake and they isolated themselves from other swimmers who were having fun closer to the shores.

The randy couple moved deeper in the lake where the water level reached the height of their waists and concealed what was happening below.

A witness said a Ghanaian media that the man appeared to be teaching the woman how to swim as they were very tight together, often kissing and cuddling amorously which is normal with many merrymaker taking a deep in Lake Bosumtwi.

Lake Bosumtwi is the only natural lake in Ghana. It is about 30 km south-east of Kumasi the capital of Ashanti and is a popular recreational area.

Other swimmers didn’t know the couple was having carnal knowledge until they were done and the man tried to disengage in vain.

The cheating pair screamed in pain attracting the attention of other swimmers to rushed to their rescue thinking they had been beaten by some creatures in the lake.

The responders were however shocked to learn that the couple was having s3x and that they were completely stuck.

The duo was covered with a long wrap to conceal their nakedness and dragged to the shores where a big crowd gathered to witness the drama.

The man who was the one screaming the most, begged for forgiveness and yelled that the excruciating pain was unbearable.

It took the intervention of the traditional authorities to appease the river gods for forgiveness. They poured libation obviously to beg the gods for the couple to be separated peacefully.

Watch the drama below: