Former Ikolomani member of parliament Dr. Boni Khalwale has turned against Kakamega senator Cleophas Malala hours after he stepped down for him.

Khalwale had on Wednesday declared that he decided to drop his Kakamega gubernatorial ambitions to support Cleophas Malal who is more junior than him both politically and agewise.

In fact, the bullfighter has been receiving criticism as to why he had to sacrifice his ambitions for a young and a ameteur politician in the name of Malala. According to kakamega voters, Boni being old ought to have stood his ground and eyed the Kakamega top seat as opposed to leaving it for the young Malala who can still garner the seat in future.

Well, it seems these backlashes reached the bullfighter and he is regretting the move to step down for Malala when things are too late.

Boni Khalwale just shared a message that was talking ill of Cleophas malala, making people to wonder whether Boni made the decision independently or if he was coerced into making it.

This is the message that the former Ikolomani MP shared on his Facebook Page: “Dr. Boni Khalwale, CBS has strategically thrown Malala into a frying pan. Only those with political knowledge of Kakamega county will understand.” It read. 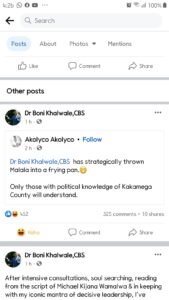 On their side, Kenyans wondered why Khalwale shared that message which was definitely going against Cleophas Malala.

Below are how netizens reacted to Boni’s shared post:

“So Boni khalwale had to repost this..weh! Earth is hard…anyway Boni is wise and he can easily crush Malala by backing the Azimio candidate in Kakamega.”

“I had to check again who shared this. Daktari, why are you fighting the man you just endorsed in the morning? Or you just had to share this demeaning post? Daktari you have no sense of humor nyasachiel.”

“The fact that you shared this post means there is more than meets the eye in the arrangement. You didn’t do it willingly.”

“Lol… Ask why he has shared this. He was Forcefully made to step down.”

“You have sensed defeat,you realized that the azimio gubernatorial candidate is strong and you have been in the cold for long,let Malala be in the cold this time.”

“We loved you but political grave loved u most .how can u step down for a looser surly you have been leading for every poll conducted. Anyway thanks for creating way for Barasa since you ware strong competitor”

“Kukosa pesa ni kitu mbaya sana, pale UDA Alibaba is the one planning his people which seat to go for and which to keep off. Pole to Dr Boni Khalwale,CBS , poor doc couldn’t fund his own campaign he depended on William. Now seems Malala has given a big stake to Dp, so Daktari has to step down and pave way for Malala. The dream daktari had for Kakamega is now gone.He will not be able to clinch the Senate Seat too.and you shout, #Hatupangwingwi ?? nisi wai skia uki sema hivo”

“Boni Khalwale is one of the best learned medical doctors in Kenya but also a perfect example when the uneducated wants to prove how educated is useless. Malala is taking what is rightfully yours simply because he is the noisiest! Another 5yrs in the political cold!”