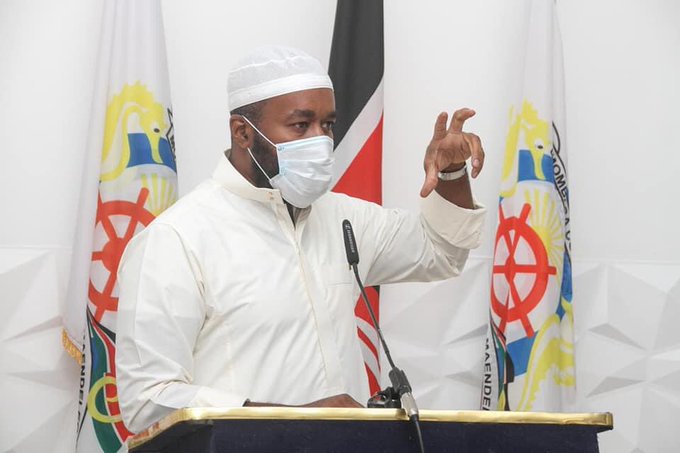 The security officer is among the four that guard the governor, tested positive for Covid-19 while in Nairobi and they have been put in quarantine at Mombasa Beach Hotel.

When the county health executive, Hazel Koitaba was called to comment on the matter, she said she could respond since she was at the meeting.

At the time of our writing, she was yet to give feedback over the allegations.

Sources who spoke to a local publication said the bodyguard had escorted the governor to Nairobi for the Senate hearing and tested positive after the session, few days before the governor went to visit Raila in Dubai.

Reports say the bodyguards were flown black to Mombasa.

“The good thing is that he is asymptomatic and so there was no need of having him admitted,” said a reliable source told the Star.

Governor Joho and his staff are believed to be undergoing routine testing for Covid-19 after every two weeks.

“This was one of the times they were going for the tests. You know they interact with so many people and thus, Joho has never wanted to take chances,” the source added.

As of now, Mombasa County is second with the highest number of coronavirus infection after Nairobi.

As of Monday 14th, July Mombasa county had recorded 1,726 cases.

Mombasa county chief of staff, Joab Tumbo said the case has not come to his attention.

“I am not aware of the issue. But let me find out and get back. Mombasa Beach Hotel is a government facility and if there were, I would have been informed,” said Tumbo.

“It would be difficult for a staff member to be admitted at the facility without my knowledge, again, if they tested in Nairobi, why would they be brought to Mombasa?” posed Tumbo.