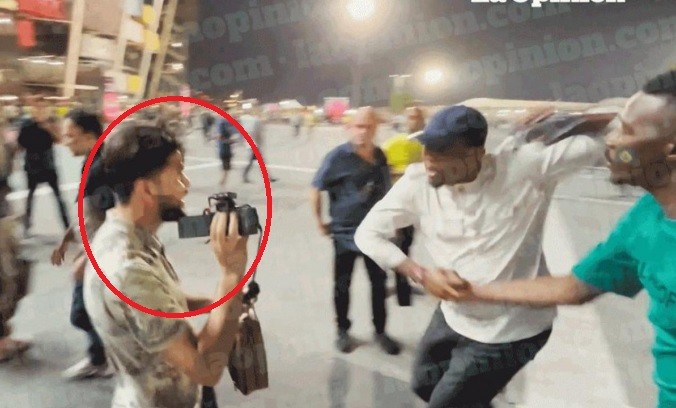 Video footage shows Eto’o smiling and posing for pictures with fans outside the stadium on Monday evening before being approached by a man who is filming him and looked to be saying something to Eto’o, who is also a Qatar 2022 World Cup ambassador.

A heated exchange then ensues and the former footballer is restrained as he attempts to confront the man.

The man continues to film the former Cameroon international but moves away as Eto’o attempts to confront him further.

Another person, appearing to be part of Eto’o’s entourage, then wrestles the camera from the man, who bends over to pick it up after it falls to the ground.

At this point, Eto’o breaks free of a group of people who had been restraining him and takes a long stride before appearing to knee the man in the face, sending him sprawling to the floor. Two men quickly pull Eto’o back.

The man who was attacked was able to stand up and did not appear seriously injured.

A video has since emerged, posted by Algerian YouTuber Said Mamouni, who claims to have been the victim of the attack. Wearing the same clothes as in the first video, Mamouni claims to be in a police station in Doha where he is filing a report.

He shows the camera is broken and tells his viewers that Eto’o had hit him in the chest, chin and jaw.

Mamouni claims he had asked Eto’o if he had bribed Gambian referee Bakary Papa Gassama, who oversaw a controversial match between Algeria and Cameroon in the African Cup of Nations earlier this year. He said this comment angered Eto’o who then attacked him.