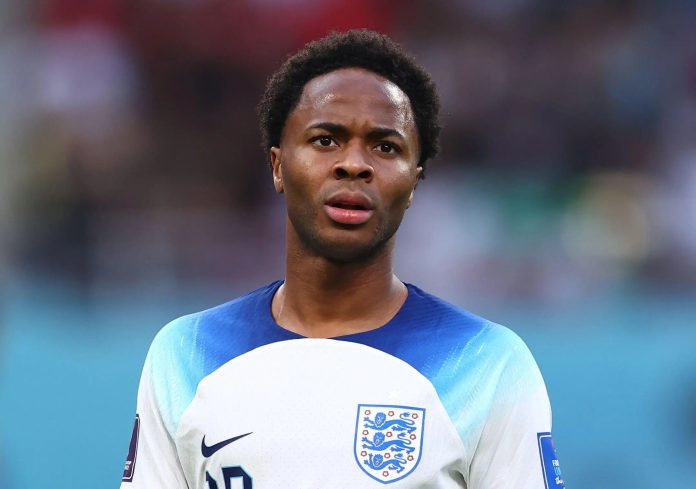 Raheem Sterling will not return to England’s World Cup camp until his family are safe, and has told friends that he needs to be ‘100 per cent sure’ before flying back to Qatar.

The star has been left ‘shaken’ following the burglary at his £6million mansion, with neighbours yesterday claiming it was an ‘inside job’ by contractors, as he is said to be the fourth Chelsea player targeted by an organised gang.

Thieves broke into the father of three’s £6million gated home before making off with a stash of watches and jewellery – prompting the shocked star to race home from Qatar to be with his family.

Police were contacted around 9pm on Saturday, December 3 after Sterling’s partner Paige returned to find ‘a number of items including jewellery and watches’ had been stolen.

A number of Sterling’s England teammates are understood to now be reviewing their own security in light of the frightening incident.

The footballer, 27, hopes to return to Qatar for England’s quarter final match against France on Saturday — but will only do so if he feels his family are safe in their Surrey home.

‘Raheem has told everyone, “There is no way I’m going anywhere unless I’m 100 per cent sure that my family can be kept safe”. He is security conscious and part of the reason they moved into the property was that it is on a very exclusive estate, with regular security patrols,’ a source told The Sun.

‘Despite this, he has still managed to be targeted, which is very upsetting for Raheem and Paige. They have just moved back to London and want to feel safe.’

A spokesman for Sterling said that ‘his focus is on being at home and supporting his family,’ they told The Mirror.

Gareth Southgate will not put pressure on Sterling to rejoin the England squad after he flew home due to deal with the police investigation over the next 48 hours.

England staff are in touch with Sterling but Chelsea are taking a lead role while he is in England.

Yesterday a neighbour told MailOnline that they were convinced Sterling’s break-in was an ‘inside job’ as she revealed how a string of builders and removal vans had been at the house.

She said: ‘I came back from an overnight flight on Saturday night just after 9pm and the police were outside. The estate WhatsApp group lit up and we all knew very quick it was a break-in and thankfully no one was hurt.

‘I’ve only seen him once walking his dogs, but I’ve seen the family and they are very young. I do feel desperately sorry for them as they have only just moved in.

‘It’s a pittance a month for the security and all the people on the chat know that Raheem’s family haven’t been signed up to the security.

‘They had dozens of removals vans, builders and electricians trooping in and out a few weeks ago and they all knew the access codes.

‘I’m sure it’s an inside job and the codes have been passed around because people would have been talking. How else would anyone know he was there?’

Meanwhile, England defender Maguire spoke of his frustration over the incident.

He said: ‘We’re out here giving everything and at home people are attacking us.

‘It is really disappointing to hear that Raheem has had to go home and get things done. We haven’t had time to talk to him, because our full focus was on the match.

‘The match could have gone differently because we lost Raheem. It is disappointing to lose him because of something out of our hands. We are all here for him.

‘It is extremely disappointing to hear that we are out here and give absolutely everything to our country, and then there are people at home attacking us.’

A source close to the team said that captain Harry Kane is trying to keep the team’s morale up following the burglary.

‘Harry knows the players’ families are really shaken up by what has happened and that is a worry for the players themselves,’ they told The Sun.

‘Harry takes his captain’s duties as seriously off the field as on,’ another source told The Mirror.

Investigators are now working to determine when a burglary reported at the home of England forward Raheem Sterling took place and say no witnesses have come forward at this stage to say armed suspects or threats of violence were involved.

The 27-year-old Chelsea star was given leave to return to the UK from England’s World Cup camp in Qatar after he learned about the burglary.

Sources close to Sterling had indicated on Sunday that armed intruders had broken into Sterling’s home while his family were inside, but an updated statement issued by Surrey Police this afternoon said the occupants of the house were not present during the burglary and that there was no evidence at this point of armed intruders or threats of violence being involved.

‘We are currently investigating a report of a burglary at an address in Oxshott, Leatherhead,’ the statement read.

‘On Saturday, December 3 the occupants returned to the address after arriving home from an international trip.

‘They contacted police just before 9pm to report a number of items of jewellery, including watches, had been stolen. Officers attended the address later that night and returned to speak to the occupants this morning.

‘At this time it remains unclear on which date the property was stolen and establishing this forms a key part of our investigation.

‘Enquiries into the full circumstances remain ongoing and officers will look at all available evidence including any CCTV opportunities.

‘We are aware of media reports stating there were armed suspects involved, however, at this time, we would reassure our communities that no witnesses have come forward to this effect and there are no reports of any threats of violence linked to this incident. Anyone with information should contact police directly if they have not already been spoken to.

‘No arrests have been made at this time.’

The news of the break-in led to Sterling being unavailable for Sunday night’s 3-0 victory over Senegal, which has taken England into the World Cup quarter-finals.

It is not yet clear whether the 27-year-old will return for Saturday’s match against France, with England boss Gareth Southgate admitting he and everyone else would have to ‘wait and see’ regarding Sterling’s availability.

Southgate was asked about Sterling in the press conference following Sunday’s win over Senegal.

‘Raheem, as the FA statement says, is having to deal with a family situation, so he’s going back to England,’ he said.

‘We’ve got to give him time to try to resolve that or be there for his family. That’s the most important thing at this time, so we’re going to give him that space.

‘It didn’t impact team selection. I spent a lot of time with Raheem this morning, but you know you have days where events happen and you have to deal with them.

‘He’s on his way home and, yeah, we’re obviously mindful of him being allowed space and (having) privacy respected, so we don’t want to talk in too much detail.

‘Of course it’s not ideal for the group ahead of a big game, but it pales into insignificance – the individual is more important than the group in those moments.

‘So, I needed to look after the situation and then I had to pass it on to others to deal with this afternoon in order to get him home.’

The Football Association offered extensive security guidance to players before leaving for Qatar and has an experienced security team on hand to advise and provide support as and when needed.

Sterling is among dozens of top-flight footballers who have had their homes targeted by thieves.

Several Manchester United players have been victims, with Tahith Chong, Victor Lindelof and Jesse Lingard all having break-ins early this year.

Security experts have warned that footballers’ widely known schedules and obvious wealth increase the risk of their homes being targeted.