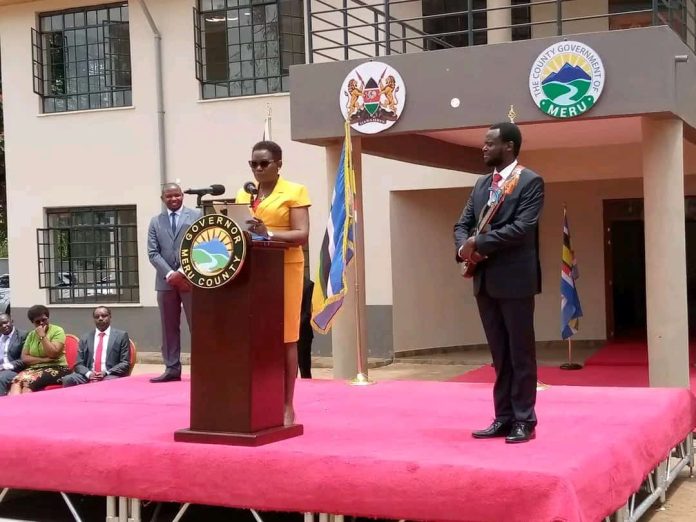 This is after the governor appointed her husband, a musician and guitarist, on two roles in the county government while unveiling her cabinet.

She said that Murega will be a patron in the Youth service as well as the Meru hustlers ambassador noting that he will not be paid a salary and will be serving as a volunteer .

“His excellency first gentleman Murega of Meru county currently holds the Ambassadorial role by the Ministry of Tourism and when you see him there he is an apostle.

“Today we are giving him a job without pay and allowances. He will be a volunteer in the docket of Meru Youth Service,” Mwangaza announced.

The Kawira/ Murega drama however began long before her election as they would be spotted together during campaigns.

The drama continued after she was sworn into office as her husband was was spotted in her first meeting where she was being briefed by county officials.

On september 9, Murega  represented Kawira in the graduation of 100 HIV positive mothers following a training on prevention of child to mother infection. He even read her speech.

A number of Kenyans have expressed displeasure on how Kawira is handling county affairs, making them look like a family matter.

Some say that Kawira is lying because no Kenyan can work for free.

“Kawira Mwangaza may be the first governor to be impeached,” a netizen said.

“The idea of her involving her husband in every meeting is ill informed. Now she appointed him making the office a family affair. She is preparing a recipe for impeachment,” another commented.

Others however argued that Kawira’s case was not different as county government first ladys have been previously accorded such treatment.

“Meru Governor Kawira Mwangaza appoints husband and better half as Youth Service Patron. But we also see wives of Governors given office spaces and salaries as counties first ladies,” read a comment on twitter.

“I don’t see any problem when Hon. Kawira Mwangaza appoints her husband as Meru Hustlers ambassador. Governors wives across the country have designated duties and official salaries. You can’t deny husbands to female governors the right to enjoy same privileges.Let that man be!” said another.

RELATED:Two Women Stranded In Nairobi After Walking From Sugoi To Meet And Witness Ruto’s Inauguration