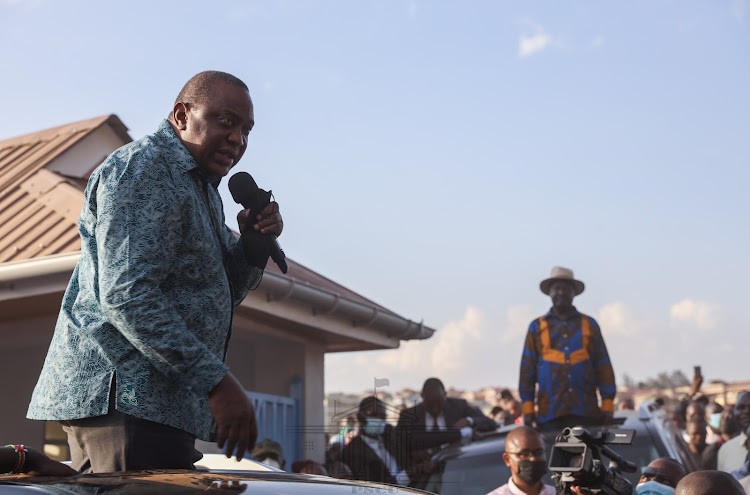 So far Raila Odinga has been climbing Mt. Kenya alone and he is doing an incredible job – this is why many believe President Uhuru’s entry will spell doom for Ruto.

Raila had been getting about 3% of the total votes in Mt. Kenya region in the past elections, political strategists say the ODM leader needs about 15% support from the region if he is to win the presidency.

Raila’s allies from the region vowed to ensure he gets at least 30% support from Mt. Kenya, hoping that he keeps a firm grip of his Western, Nyanza, Coast and Nairobi bases.

The president reportedly wants Raila to climb the mountain alone before he can join him later to campaign for him.

So far Raila has done an incredible job climbing the mountain, he has held rallies across the region which has been attended by thousands who accorded him a warm reception unlike in the past.

Kieni MP Kanini Kega has since expressed confidence the Mt. Kenya region would stand solidly behind Raila if President Uhuru starts campaigning for him.

Speaking to Francis Gachuri on Inooro TV alongside Murang’a Senator Irungu Kang’ata, Kanini Kega confidently stated that Ruto will have a tough time even accessing Mt. Kenya if Uhuru decides to campaign for Raila there.

“A time is coming whereby even DP William Samoei Ruto will not be allowed to access Mount Kenya. The moment President Uhuru Kenyatta will start storming the Mountain with Grand Political Campaigns, there is a group of people who will be forced to dance to the tune. Silence is a very dangerous Weapon. Uhuru Kenyatta has been quite for so long, but very soon he will take the right measures,” said the MP.

Related: Kanini Kega Reveals Why Ruto Was Stoned In Kieni While Raila Was Warmly Welcomed