The Kenya Kwanza fraternity are not sure whether to follow the words of veteran economist David Ndii or those of digital strategist Dennis Itumbi.

Apparently, the two have expressed contrasting views to their supporters with Itumbi claiming that they are tallying Ruto’s votes and are almost done. On the other hand, David Ndii shocked them that it would not be practical to count and finish those form 34As faster like claimed by Itumbi.

“Good people. The 34As are almost all in, and the results in them are final. The purpose of uploading them to a public portal is to enable scrutiny, including parallel tallies. Tallying all 46k quickly is a tall order for parties and media houses. 1/3.” Twitted Ndii.

On the other hand, the digital strategist went Live on Facebook at a Cybercafe, stating that it was their Tallying Center and that they are almost done.

In the meantime, Kenyans had the following to say:

“Dennis Itumbi is going Live on Facebook at a Cybercafe lying its their Tallying Center and they are almost done. On the other Hand David Ndii is crying on twitter that no one other than IEBC can tally over 46000 forms begging hustlers to volunteer and help them tally. They have been caught off-guard. When the Lords want to set your table of victory in presence of your enemies he first confuses them and makes them mad.” 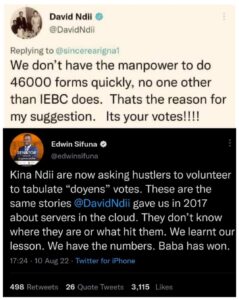 The economist went ahead to state that it was a free world hence anyone or any media station ought to tally the same and find out the results at the end of the day even as he blamed the mainstream media for failing Kenyans.

“We are certainly doing ours. But citizens should do theirs too. It’s their election. The more the merrier. The media has failed.” He said.

Woman Dies In The Hands Of Chicken Amid, DP Ruto’s Fiasco