Kimilili Member of Parliament Didmus Barasa has broken silence after being announced the winner of the constituency’s seat.

The incumbent, who vied on a UDA ticket, was announced winner after garnering 26, 861 votes in the elections that were conducted on Tuesday this week.

His DAP-Kenya opponent Brian Khaemba managed to garner 9, 497 votes. Both Barasa and Khaemba were not present at the St. Luke’s Kimilili Boys tallying center when the Returning Officer announced the winner.

Barasa, who is in hiding, has spoken for the first time, hours after emerging victorious. In a tweet on his official twitter account, he thanked the people of Kimilili for re-electing him.

“Thank you the great people of KIMILILI CONSTITUENCY for re-electing me overwhelmingly for another term. I LOVE YOU TO BITS,” he wrote. 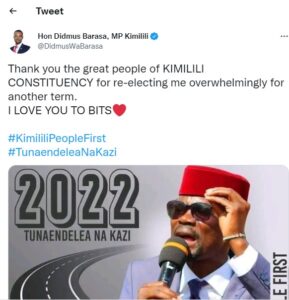 The comment section was however not friendly as netizens branded him a murderer. Barasa is currently being sought by the police for allegedly killing his opponent’s aide on Tuesday evening.

On Wednesday, the Director of Public Prosecution Noordin Haji ordered the arrest of the MP who is believed to have sought refuge in Uganda. This came shortly after he shared his photo and that of William Ruto on his social media accounts.

“DPP, Noordin Haji, has given directions to have Hon. Didmus Barasa apprehended, record a statement and have the relevant file availed to his office for appropriate action. According to police in Bungoma, the MP is still at large and his phone is switched off.” read a statement from the office of DPP.

RELATED STORY:Wafula Chebukati Issues Way Forward On Didmus Barasa Who Is Being Sought By Police Over Murder