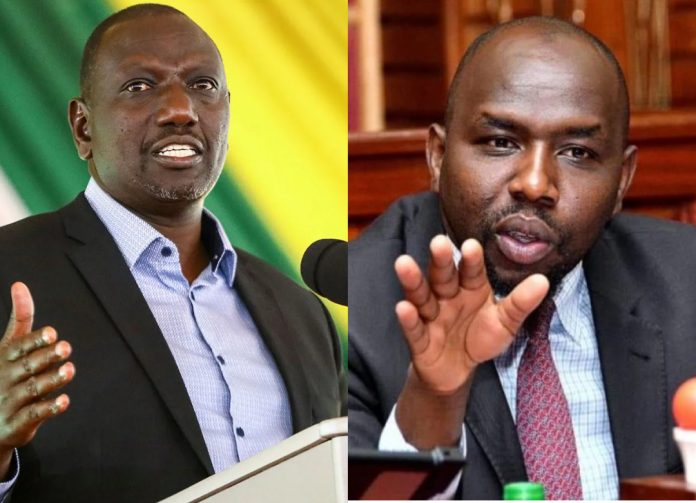 Murkomen has replaced five KPA board members with new ones.

Gen (Rtd) Joseph Kibwana’s nomination as chair of the Kenya Ports Authority (KPA) board was canceled a few days ago by Transport Cabinet Secretary Kipchumba Murkomen, who replaced him with Benjamin Tayari,  former Kinango Member of Parliament.

“In exercise of the powers conferred by section 4 (f) of the Kenya Ports Authority Act, as read together with section 51 (1) of the Interpretation and General Provisions Act, the Cabinet Secretary for Roads and Transport appoints—Musa Osman, Emmanuel Kibet, Consolata Lusweti, Lucas Maitha and Caroline Njoki Maina to be members of the Board of Directors of the Kenya Ports Authority, for a period of three (3) years, with effect from 23rd January, 2023. The appointment* of Lydia Yator, Stephen Gichuhi Gichohi, Conrad Thorpe, Farida Abdalla Sud, and Nilfat Kassim Ali is revoked.”

The nominations of Paul Magutu Njaria, Dorcas Wanjiru Ngechu, John Munguti Kisengi, Miriam Wairimu Ndirangu, Stephens Ogutu Oyaya, and Diana Marion as members of the Pharmacy and Poisons Board have been revoked by Cabinet Secretary for Health Susan Wafula, according to the same Gazette announcement. The cancellation will be effective starting on January 20, 2023.

Charles Githinji has also been chosen to serve as the Pharmacy and Poisons Board’s chairman. Following this appointment, James Mandere Rogers Atebe’s earlier appointment is canceled. Githinji’s term of office is three years.

“I, William Samoei Ruto, President and Commander-in-Chief of the Kenya Defence Forces appoint Charles Githinji (DR.) to be the Chairperson of the Pharmacy and Poisons Board. The appointment of James Mandere Rogers Atebe (Dr.) is revoked,” the notice directs.

The Non-Executive Chairperson of the Youth Advisory Board is Sophy Nekoye Waliaula.

In an effort to address the issue of female genital mutilation in Kenya, President Ruto has also appointed Surum Ipato Korema as the chair of the Anti-Female Genital Mutilation Board. The six-year appointment, which will start on January 20, 2023, revokes Agnes Mantaine Pareiyo’s appointment.

According to the gazette notification, Phillip Mong’ony would also hold the position of Chairperson of the State Corporations Advisory Committee for a three-year period.