Chipukeezy’s Ex Girlfriend Ends Up Being A Lesbian, Caught Making Out With Another Lady In A Swimming Pool 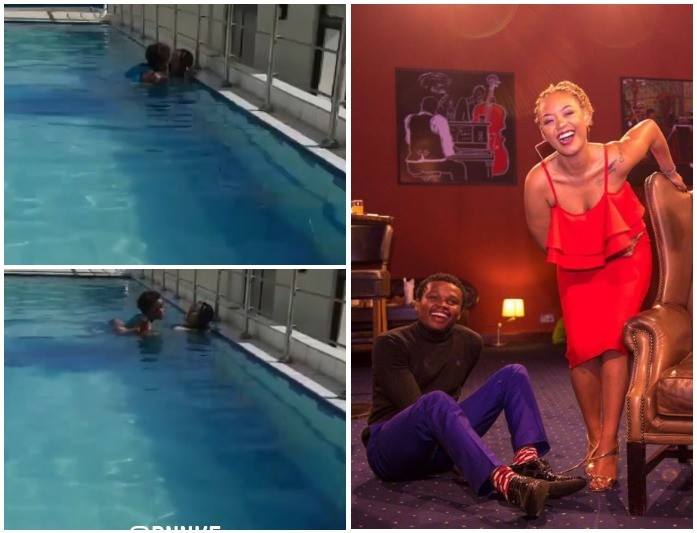 Chipukeezy’s former girlfriend Kibanja has now resorted to dating fellow women after breaking up with the comedian.

Chipukeezy hooked up with Kibanja in November 2018 after breaking up with his longtime girlfriend Vivian Mandera.

Mandera and Chipukeezy had been dating for three years after the comedian proposed to her in 2015 and were set to wed in 2018 only for the breakup to happen.

Chipukeezy quickly moved on with Kibanja after the breakup with Mandera, but their relationship didn’t stand the test of time.

Cracks started emerging in Chipukeezy and Kibanja’s relationship in late 2019 and in early 2020 the two ultimately went their separate ways.

After the breakup, Kibanja introduced another man she was dating in May last year. She posted their romantic photos on social media.

Well, Kibanja also broke up with that guy and ultimately decided to be a lesbian. She is now secretly dating a lady who goes by the name Chipmurnk on Instagram.

Chipmurnk has come out to openly reveal her sexuality but Kibanja is yet to to reveal that she is now a lesbian.

Chipmurnk and Kibanja’s lesbian relationship was exposed by blogger Edgar Obare who shared several videos of them getting cozy.

Chipmurnk and Kibanja are seen passionately kissing and cuddling amorously in a pool in other videos shared by Obare.