First African Catholic Bishop of Meru Silas Njiru could be buried in 2035 at the St Joseph Cathedral in Meru town.Bishop Njiru, who died...
Read more
Home Politics What DP Ruto Whispered To The President During BBI Launch
Politics
October 26, 2020

What DP Ruto Whispered To The President During BBI Launch 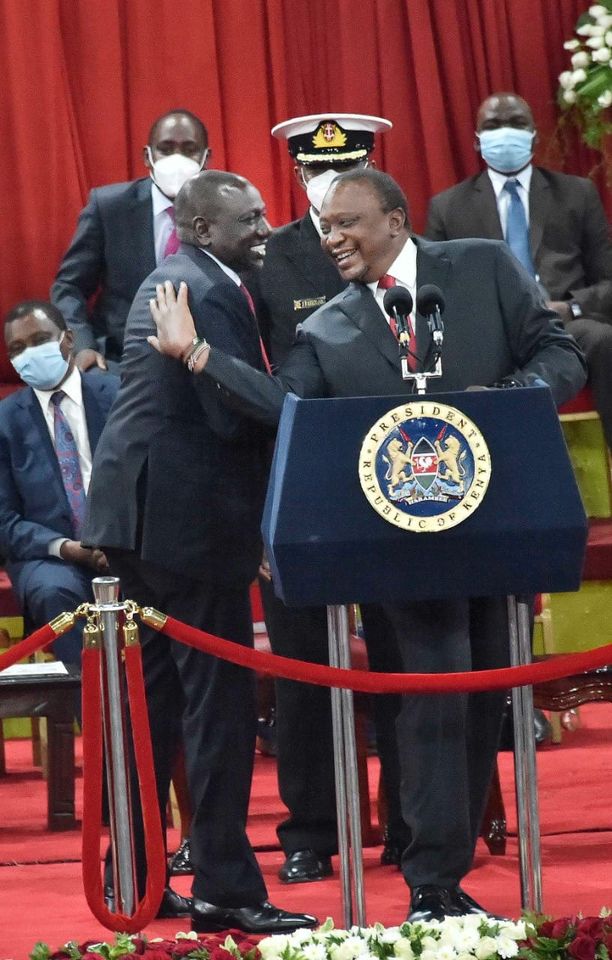 Deputy President William Ruto was had defending himself to the President for engaging in early campaigns ahead of the 2022 polls.

This comes after President Kenyatta took a dig at him, accusing him of having lost direction on the government agents and started early campaigns as he eye top job.

President Kenyatta said he did not understand how DP Ruto forgot his duties and started focusing on the 2022 campaigns.

The President made reference to a relay race where one runner starts the race and then pass the button to the next racer as per the political deal he had with his deputy. He noted that when he came to the finish line, he found Ruto running in the opposite direction.

“Tulisonga pamoja lakini hapa kati kati ndio sasa 2022 ikaingilIa akasahau yale mengine but nasema tutulize boli.. (We walked together, but somewhere along the journey, 2022 matters became the priority and he forgot everything else. But I’m telling him to take it slow..” Uhuru said.

Speaking during the BBI launch, the President noted that the 2022 polls will come and go.

While comparing the presidency to a relay race, President Uhuru said instead of his deputy waiting for him to hand the mantle, he found that Ruto had already started running in the opposite direction.

“2022 itakuja mwaka hairudi nyuma.. Tuko relay, lakini sasa my brother William anapinduka anakimbia nyuma..mos mos.. utafika tu (2022 will come.. we are in a relay race but my brother William has decided to run in the opposite direction. We will reach there…” he said amid laughter.

As Uhuru laughed at the joke, Ruto stood and walked towards his podium and whispered a joke at the President, to which they both laughed before resuming his seat.

DP Ruto is heard whispering to the President’s ear saying: “Niliona nimetolewa namba 9 ndio maana nikaamua (I was displaced from my position number 9 and that is why I had to).”