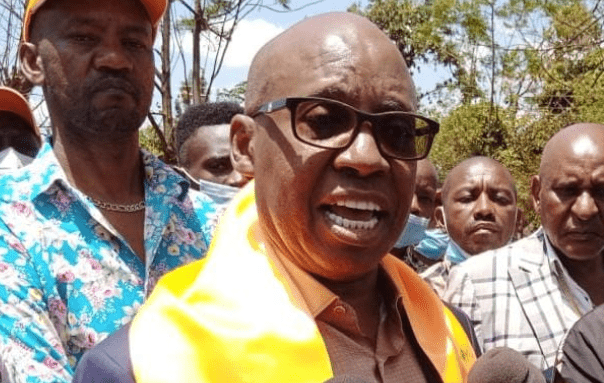 Jimi Wanjigi has insisted that his arrest is in connection with the forthcoming elections and nothing to do with land as DCI claims.

Wanjigi was arrested on Tuesday evening and taken to the Kamkunji police station over claims of forgery. He is said to have conspired with other individuals to forge a title deed for the piece of land located in Westlands.

According to him, he is the legitimate owner of the piece of land together with his wife Irene Nzisa. The couple moved to court and filed a complaint about scammers who had the intention of swindling them of the Kshs1.2 billion piece of land.

“We went in 2018 to complain that there are fraudsters who are taking it away and now suddenly we are the culprits,” Wanjigi told reporters.

He further said that the suspected fraudster was arrested and the matter is before the court.

“There is a previous police report, from the same Directorate of Criminal Investigations (DCI) that is lodged in court that charges the culprit, so you wonder what are these things that are coming up all of a sudden.

“It has nothing to do with the property just like the guns a few years ago. It is clearly just a persecution. These are lies about crimes we know nothing about,” Wanjigi claimed.

The businessman also hinted that his troubles could also be in connection to the firearms case that saw the DCI boss get sentenced to four months in jail.

“If he (Kinoti) wants to be he can be as petty as he wants right now.  The DCI is a convict, he has no rights to put anybody in handcuffs. He has no rights and the court will adjudicate that. He is a convict and he was even sentenced.

“This is just total rubbish. I think that he may be part of it. There is a bigger picture here and it has to do with elections after all why is it that every election it is Jimi that is sought. In 2017, I was looked for and now again in 2022. It is about the elections. I am making the elections very uncomfortable so let us see what is going to happen,” Wanjigi said.

The billionaire  added that he had planned to meet his allies in ODM so as to settle on the party’s flagbearer before IEBC’s deadline in February.

“This weekend we were going to launch a special delegates congress where we had called about 2, 000 people, delegates of ODM, to elect the president of the party within 21 days. That was to happen this coming weekend on Sunday,”

He also warned a section of Jubilee administration who claimed that he had organized his arrest that their time is coming since they would soon be out of government.

Wanjigi is expected to be arraigned in court later on Wednesday after spending the night at Kamukunji police station.

Why Sankok Was Banned From Burying Son At His Own Home, Resorting To A Lonely Bush