More
HomeNewsUhuru's BBI Agenda In Doubt As Ruto's Allies Move To Court To... 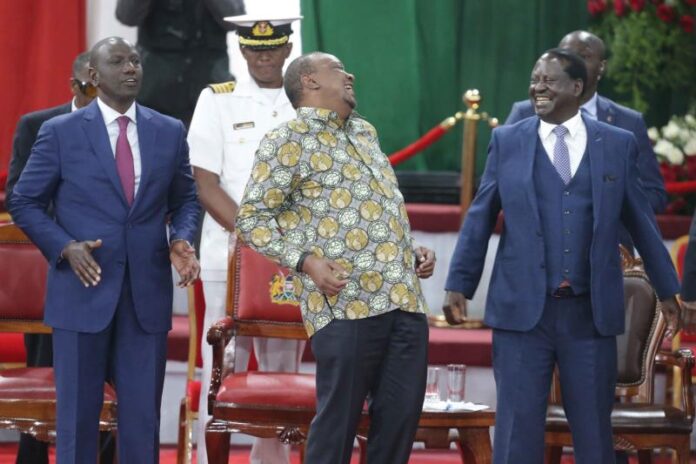 Sonko News has established that those allied to the DP will file a court petition to stop the Building Bridges Initiative. If the leaders succeed, it will deal a blow to President Kenyatta and his handshake partner Raila Odinga’s quest to amend the constitution.

Sources say Ruto’s Tanga Tanga brigade is at an advanced stage of filing a petition to stop the BBI process.

According to the Star, the DP fears if he is defeated in a referendum too close to the 2022 elections, then the outcome will reenergize his opponents who will ride on the plebiscite to win the elections.

“We expected the petition to be filed today (Tuesday). I am sure it will come through as soon as everything has been finalized,” a source told the Star.

This will not be the first time an attempt will be made before the court of law to stop the BBI.

Such a petition was earlier filed unsuccessfully at the High Court by former Presidential candidate Akur Aukot.

The former Third Way Alliance boss argued that the initiative was unconstitutional and a waste of the public’s money.

However, the High Court ruled that President Kenyatta exercised executive powers that cannot be questioned by the court.

Previously, Ruto publicly opposed the constitutional amendments indicating that he might rally his troop to oppose any effort to pass the BBI process.

“I don’t know what is being amended…to the best of my knowledge, this whole push is by leaders, not by the people. People at this moment are concerned about jobs, about their livelihoods,” Ruto said.

Speaking in Kitengela, Kajiado County, last weekend, Ruto said his quest for the country’s presidency is unstoppable and he was ready and waiting for the ‘deep state and ‘system’.

He added that he was aware of a plot by the ‘deep state’ and ‘system’ to shatter his Presidential ambitions.