Tuju: Ruto Must Come out,Express Himself Over Mama Ngina Insults 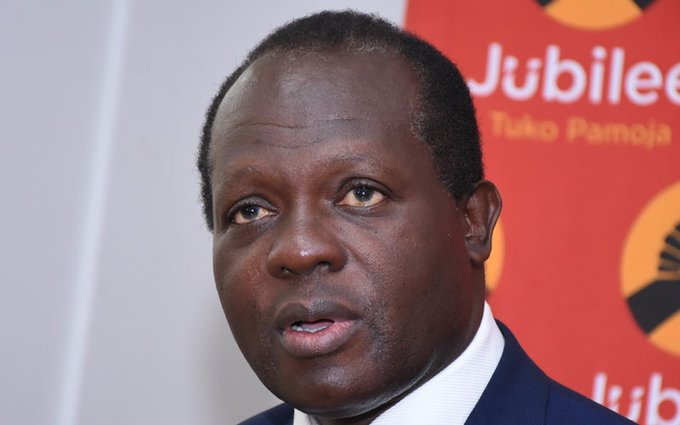 Raphael Tuju, Jubilee’s Secretary General, has called on the Deputy President William Ruto to come out and address the insults being hurled using his name.

Speaking to Citizen tv on Wednesday night, Tuju said that he tried to convince Ruto to come out and clear the air regarding the matter.

“I called Deputy President this afternoon and we had a discussion on it and I did make my position very clear that because some of the things are being done on his name or using his name, he has to come out and express himself,” Tuju said.

Tuju asked Ruto to address the issue publicly stating that his twitter response would not satisfy Kenyans.

However, Ruto went on twitter to reaffirm his stand, that no amount of anger justifies the use of offensive words or insults.

Leaders should exercise restraint and avoid insults and bad language against other kenyans.Unsavoury words against mothers and Head of State is a NO, NO. No amount of anger justifies use of offensive insulting language.There exists decent ways to communicate however one feels.

All these have been triggered by the behaviour of some of his allies, including Kapsaret MP Oscar Sudi and Emurua Dikirr’s Johanna Ng’eno who had uttered insults at President Uhuru Kenyatta and former First Lady Mama Ngina Kenyatta.

On Ruto’s defense, Tuju stated that the DP also mentioned how he had been targeted by Jubilee Party vice chairman David Murathe, who had linked him to the Kemsa saga as well as painting him as a corrupt individual unworthy of holding the country’s top seat.

“The issue of Mama Ngina cannot be compared to that of Murathe… she is nobody’s peer,” Tuju said.

“You cannot compare Murathe’s issue with taking on the former First Lady Mama Ngina Kenyatta, there is now way by which you can equate the two. The former First Lady is nobody’s peer in this country today…” – Raphael Tuju, Jubilee Party Sec. Gen. #NewsNight pic.twitter.com/QMGmR6oa21

He added that the issue of Murathe’s utterances would be addressed.

The secretary general added that there is no way that the party can accept the slur language directed to Mama Ngina.

“It is completely despicable to hear anyone calling themselves a leader referring to the former First Lady with disdainful language and vulgar vernacular, that is a new low that we cannot accept” – Raphael Tuju, Jubilee Party Sec. Gen. #NewsNight pic.twitter.com/wS5HfSYxu3

Tuju’s remarks come as more leaders continue to call upon their counterparts to refrain from insults and abusive language irrespective of their political sides ahead of the 2022 elections.

Wiper leader Kalonzo Musyoka has weighed in on the matter of desisting from utterances that could fuel hatred and violence.

In a statement on Tuesday, Kalonzo condemned the recent utterances made by MPs Johanna Ng’eno (Emurrua Dikir) and Oscar Sudi (Kapseret).

“It is quite shocking that the two legislators, in their zeal to score political points, chose to go for the former First Lady’s jugular,” he said.