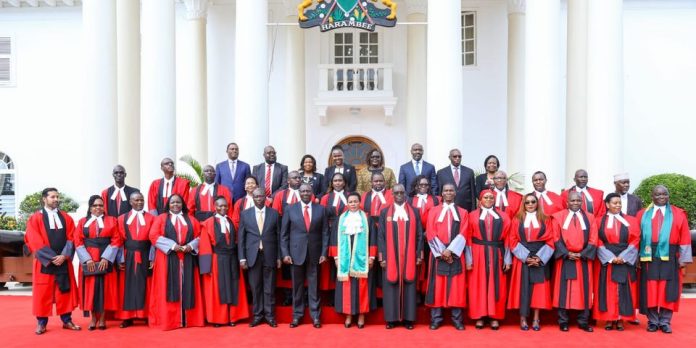 The newly sworn-in High Court judges have been urged by President William Ruto to carry out their duties carefully and honor their oaths. The President asserted during a speech at State House that the swearing-in of the judges was evidence of the nation’s freedom and all systems of government were functioning.

He also urged the judges to keep their commitments to work hard, maintain objectivity, and uphold the constitution in their hearts.

“As you write those judgements, remember you swore in the name of God. You have sworn to diligently serve the people of Kenya…and I have no doubt you will serve this country with diligence. You have promised to be impartial and not to be influenced by ethnicity and religion and that fear, favour, ill will and prejudice will not lace your judgments,” says President William Ruto.

The addition of 20 judges will bring the overall number of judges on the High Court to 102.

“As you consider all the issues that come before you, remember that you serve in the Judiciary of Kenya. We want the Judiciary respected, and so it’s your responsibility to ensure that our Judiciary is fair, independent, competent and above all serves with integrity. I have no doubt in my mind that you have what it takes to discharge and live up to your oath of office,” said the president.

“You have committed that you will always do that which is impartial and you will not succumb to blackmail and threats. Remember to administer but also protect and defend the constitution of Kenya because that is the basis on which we are established as a nation,” the President insists.