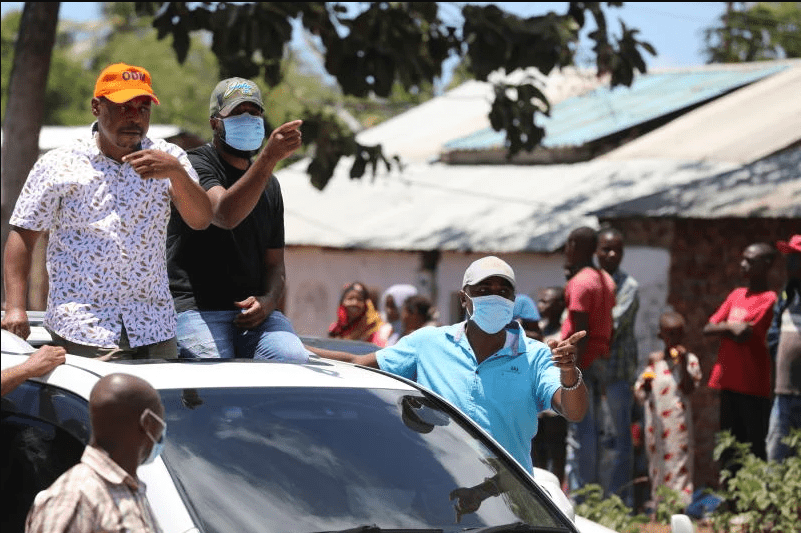 ODM leaders have vowed to teach Deputy President William Ruto a lesson in the Msambweni by-election.

The leaders said they could not afford to let a candidate supported by Ruto clinch the seat that became vacant after the death of Suleiman Dori.

Ruto’s team has run behind independent candidate Feisal Bader who was cleared by the IEBC on Thursday.

Addressing supporters after Boga being issued with the certificate, Joho said he together with other Coastal governors will campaign in the constituency to ensure ODM reclaimed the seat.

“Godhana, Kingi, Samboja, and I are going to rent a house and camp in Msambweni until we deliver the seat to ODM,” Joho said.

Joho warned that DP Ruto and his team will “see dust” in the by-election just like it happened in the Kibra by-election.

“We know the DP’s aim is to scuttle our 2022 plan to win the presidency. Let me tell him that he will see dust in this by-election. We are here to give Msambweni people a leader they deserve,” Joho said.

Governor Gohana said the ODM leaders were in Msambweni to reclaim their territory and asked opponents to prepare for a serious political battle.

“ODM has a big arm. We are here to reclaim our territory,” he said.

On the other hand, Orengo asked the Deputy President to resign from his position since has “disrespect to the president”.

Orengo claimed William Ruto was using “political users” such as former Mombasa Senator Hassan Omar to win in the by-elections.

“This is an ODM fort. The DP has no business fronting a candidate against the interests of his party. We are ready to face them just like in Kibra,” he said.

Boy said Kwale is still an ODM zone and told his political foes that they were in for a big shock.

A Nigerian man identified as Henry has exposed how ladies are materialistic. Henry had asked the young lady to be his girlfriend and at first,...
Read more
- Advertisement -
Celebrity