More
HomeCelebrityRuto's Son Denies Being Gay After Video Surfaces Showing Him Getting 'Engaged'... 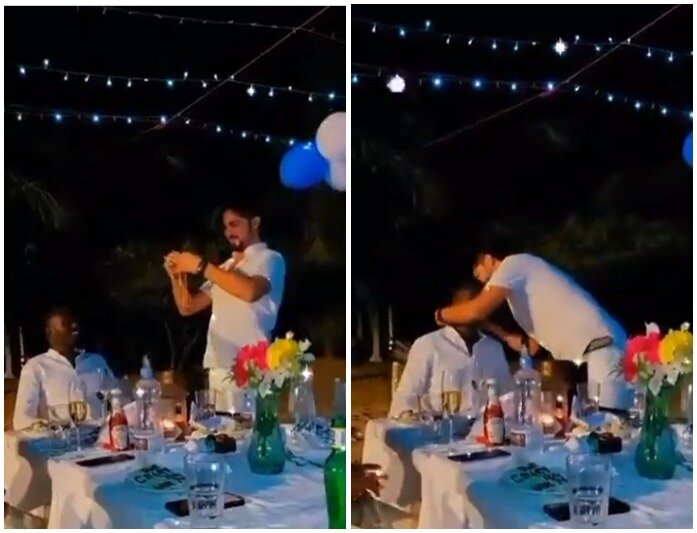 Deputy president William Ruto’s son Nick Ruto has come out to strongly deny that he is gay after viral video of his ‘engagement’ sparked debate about his sexuality.

The video which went viral on social media shows a Nick being given a chain by an unidentified man who appears to be of Caucasian origin.

The man gets close to Nick and puts the glittering chain around his neck amid claps from a few people in attendance.

The sight of Nick and a fellow man putting a chain on his neck prompted many people to conclude that the duo was a gay couple.

Video that captured the moment quickly went viral online with rumormongers claiming it was a gay engagement party for Nick and his mzungu lover.

Nick’s sister Charlene Chelangat Ruto however rubbished the gay rumors saying that he video was just taken during her brother’s birthday and anything else going round the social media is pure lies.

“It was Nick’s birthday, the rest is garbage circulating”, wrote Charleen on Facebook.

Nick also took to Facebook to set the record straight about the viral video and his sexuality in general.

“Build your circle and celebrate each other.If you can,gift your friends the best you can on their special occasions like Birthdays, Anniversaries, weedings e.t.c This will help you understand the value of friendship and comprehend that gifting a friend of same or Opposite gender does NOT amount to Sexual/erotic relationship. Thank you all for your Birthday wishes and gifts,” wrote Nick Ruto. 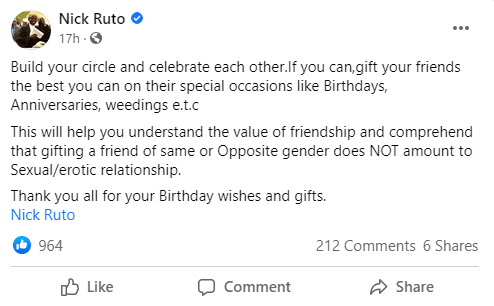