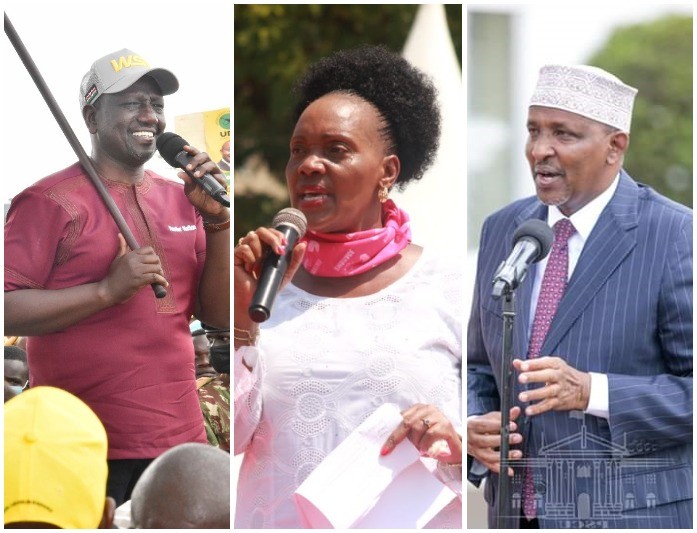 William Ruto ally Aden Duale attracted the ire of many when he made derogatory remarks on Kisumu Women Rep Rosa Buyu.

The Garissa Township MP showed a disrespectful attitude towards women when he told the Kisumu Women Rep that he is not her boyfriend on the floor of Parliament.

Duale made the remarks on Thursday October 7th House proceedings. He was making his contributions on the debate about insecurity in the northern part of the country when Buyu interjected.

“Those of us who do not come from Northern Kenya, please do not play party politics… Don’t shout at me, I am not your boyfriend,” Duale shouted at Buyu.

Rising on a point of order, an agitated Buyu questioned whether Duale was right to make such comments.

“Madam Speaker is the Honorable Member in order to suggest that I, Rozaah Buyu, wants him as a boyfriend,” an angered Buyu stated.

Well, Ruto was not pleased by Duale’s uncouth attack on Kisumu Women Rep. The DP dismissed the Garissa Township MP while speaking at the home of Kajiado East MP Peris Tobiko on Friday October 8th.

Ruto, without mentioning Duale’s name, called out men with the habit of insulting women leaders or any woman in the society, stressing that the behavior is uncouth, unpleasant and uncalled for.

“And I want to talk to male leaders. Those men who have the audacity to stand up and abuse women should be ashamed of themselves,” said Ruto.

Ruto further said such men who abuse women should not be given any chance whatsoever to lead the country or to lead anywhere not even a herd of cattle.

“Any man who abuses women is not worth any form of leadership. In fact he is an embarrassment and a disgrace to the entire nation. You cannot abuse our mothers, you cannot abuse our women no matter what position your are looking for,” Ruto said.

The deputy president further commended Kajiado residents for electing a woman -Peris Tobiko – as their leader.

“But I want to say that contrary to abusing women, you Kajiado east constituency residents have shown that a woman can lead. You elected her (Peris Tobiko) for the first time and for the second time.”

Related: Duale Brings Parliament To A Standstill By Making Controversial Remarks Towards A Female Member