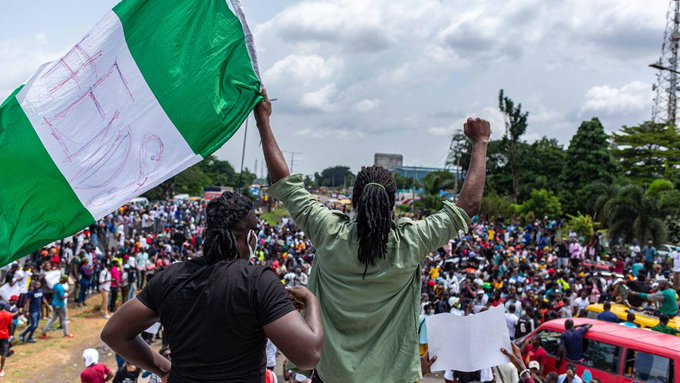 A number of people taking part in a protest against police brutality have reportedly been shot dead or injured in Nigeria’s biggest city, Lagos.

A witness told the BBC he had counted about 20 bodies and at least 50 injured after soldiers opened fire. Amnesty International said it had obtained credible reports of deaths.

The authorities have promised an investigation into the shooting.

An indefinite 24-hour curfew has been imposed on Lagos and other regions.

Protests over a now-disbanded police unit, the Special Anti-Robbery Squad (Sars), have been continuing for two weeks.

Reacting to the shootings in Lagos, former US Secretary of State Hillary Clinton called on Nigerian President Muhammadu Buhari and the army “to stop killing young #EndSARS protesters”.

Nigerian footballer Odion Jude Ighalo, who plays for Manchester United, accused the Nigerian government of killing its own citizens. “I’m ashamed of this government,” he said in a video posted on Twitter.

Three witnesses told Reuters News Agency that the soldiers fired at the protesters who had gathered in the Lekki district of Nigeria’s largest city in defiance of an indefinite curfew imposed hours earlier by the authorities. Hundreds of people were at the site at the time of the shooting, which witnesses said took place around 7pm (18:00 GMT).

“They started firing ammunition toward the crowd. They were firing into the crowd,” said Alfred Ononugbo, 55, a security officer. “I saw the bullet hit one or two persons,” he said.

Scenes of protesters removing a bullet from someone’s wound and pleading for help were broadcast in a live video on Instagram by DJ Switch, a popular disc jockey. Gunfire and sirens could be heard in videos filmed near the toll gate.

They are still shooting in lekki toll gate!!!!! pic.twitter.com/jQlvEuJ1Ee

There was no immediate comment from the Nigerian army. Gboyega Akosile, spokesman for the governor of Lagos state, said in a Twitter post that authorities had ordered an investigation.

Earlier on Tuesday, Lagos state Governor Babajide Sanwo-Olu alleged that criminals had hijacked the protest movement “to unleash mayhem”, as he announced the curfew.

As the round-the-clock restrictions went into force at 4pm (15:00 GMT), protesters in Lagos sang the national anthem and pledged to remain out on the streets.

Separately on Tuesday, the national police chief ordered the immediate deployment of anti-riot forces nationwide following increased attacks on police facilities, according to a police spokesman.

Tens of thousands of people have been taking to the streets every day for nearly two weeks across Nigeria to demand an end to police violence.

The protests, organised under the #EndSARS hashtag, began with calls to scrap a notorious police unit, the Special Anti-Robbery Squad (SARS), which has long been accused of extortion, torture and extrajudicial killings.

After days of widespread demonstrations, the authorities announced the dissolution of SARS and later ordered all personnel to report to the police headquarters in Abuja for debriefing and psychological and medical examinations.

Meanwhile, the forming of a new Special Weapons and Tactics (SWAT) team was announced to replace SARS.

However, the announcements did not satisfy protesters, who viewed them as just another renaming exercise and pledged to stay on the streets until promises are delivered and their demands – including the release of those arrested – are met.

On Monday, Amnesty said at least 15 people have been killed since the demonstrations began.