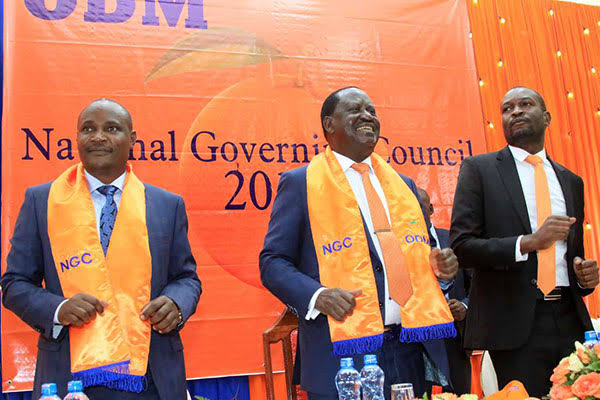 Raila Odinga-led party, ODM has set tough rules for those yarning to vie for MCA post in the next general elections.

The latest resolution comes after two failed attempts by the National Assembly, both in 2012 and 2016, to force these vying for MP and MCA post to have degree certificates.

However, the ODM chair said the party will consider education qualification when nominating and electing MCAs in 2022.

According to Mbadi, lack or poor education qualification among some ward reps might have contributed to the low-quality debates and chaos witnesses in county assemblies.

“Those who are not learned will not be nominated or sponsored by the party. Somebody cannot be sitting in the Budget Committee, for instance, yet he or she understands absolutely nothing about the subject,” said Mr. Mbadi as reported by Daily Nation.

Speaking on a Luo vernacular radio station, while commenting on the recent chaos at the Homa Bay County Assembly, Mbadi said setting minimum education qualification would help bring sanity in some county assemblies.

“What we are witnessing in county assemblies like Homa Bay is pure greed by MCAs who change the leadership of the House to suit their interests. Their focus is the millions of shillings in mortgages and other perks; this is why we have been witnessing such chaos,” he said.

Mbadi added it was about time the party cracked the whip to stop the ward reps’ unbecoming behavior.

it was during the fracas that Deputy Speaker Godfrey Anyango was tripped down to his underwear.

This was not, however, the first time such chaos happens in the House and other within and outside Nyanza region.

In 2012 Parliament amended numerous sections of the Political Parties Acts as well as other electoral laws ahead of the 2013 General Election but it was later suspended.

In 2013 MPs and MCAs were only required to have a three-month post-secondary certificate to be eligible to contest.

Just a year before the 2017 polls, there were some proposed amendments by Justice and Legal Affairs Committee chairman Samuel Chepkong’a to put a minimum qualification of either a degree or a diploma certificate for those contesting forward rep post. Although the amendment was passed, it was carried forward to 2022.

At the moment MCAs are only required to have at least Form Four certificate.

It is not yet clear whether ODM will push the proposal through parliament or just implement it at the party level.

A critically ill Kenyan man, who collapsed in his house and was rushed to hospital, shocked morgue attendants after he regained consciousness as they...
Read more
- Advertisement -
Crime

Controversial Gatundu South member of parliament Moses Kuria has threatened to oppose the Building Bridges Initiative(BBI) by joining the NO campaign.According to Moses Kuria,...
Read more

President Donald Trump said Thursday for the first time that he would leave the White House if Joe Biden is officially confirmed the winner...
Read more
News