Machakos governor Alfred Mutua and Lilian Ng’anga announced their separation in mid-August without giving reasons that led to their decision.

Through separate social media post, the two said they were divorcing but would still work together in some projects.

“Winds of change blew my way and two months ago, I decided to end my long term relationship with Dr Alfred Mutua. We had a good run and I am forever grateful to God he brought us together,” Lilian said.

It is however now a bit clear why the two went separate ways.

According to sources, Lilian hurriedly separated with Governor Alfred Mutua because she already knew she was pregnant.

“I highly suspect that Lillian Ng’ang’a hurriedly divorced from Governor Alfred Mutua because she was pregnant. It is however not clear who the father of the unborn child is although it’s common knowledge that 99.999% of expectant mothers would wish to be near the man who made them pregnant,” a source said.

On September 25, through a tweet, Lilian revealed she was experiencing kicks in her wombs.

“Today’s reading Romans 11. Both 29 and 36 stood out for me at the moment. Though the whole chapter is intense….For from him and through him and for him are all things. To him be the glory forever! Amen,” Juliani posted.

A fan however saw it better to caution Juliani over Lilian’s pregnancy issue that is trending.

“Bro off the comment section kuna kitu inatrend saa hii there coming to attack you 😂😢,” read the comment. 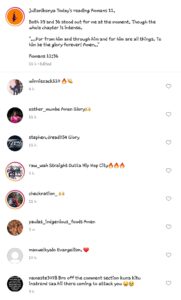 In a recent interview, Juliani revealed that she met Lilian in June this year and did not hesitate to shoot his shot.

“Lilian, I met her like early or mid-June. As a man I did not sleep in class,” Juliani said.

RELATED STORY: Revealed: Lillian Ng’ang’a Took Off From Mutua Because She Was Pregnant For Juliani