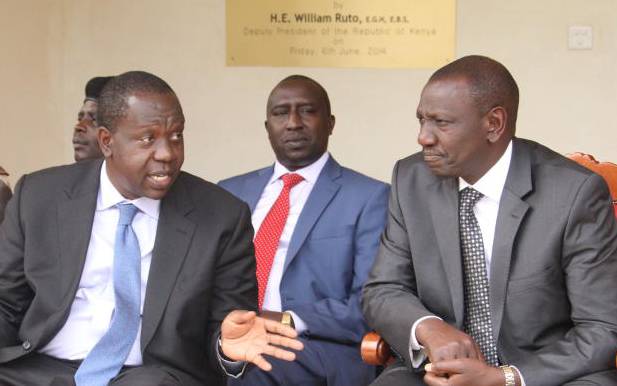 Nyali MP Mohammed Ali has been accused by his Tangatanga colleague of forging his signature in the impeachment motion of Interior Cabinet Secretary Fred Matiang’i.

The motion to impeach Matiang’i is spearheaded by Mohammed Ali who claims that 92 MPs appended their signatures to back his bid.

The Nyali MP noted that the impeachment is anchored on four main accusations including; failure to respect court orders, misuse of office, disrespecting MPs, and failure to protect Kenyans as required in the constitution.

Most of the MPs who have signed the motion are allied to deputy president William Ruto, however South Mugirango MP Silvanus Osoro has come out to accuse Mohammed Ali of forging his signature.

Osoro noted that there are several discrepancies on Ali’s list saying that his name on signature no.88 doesn’t even correspond with the constituency he represents.

The South Mugirango MP said that he doesn’t see eye to eye with Matiang’i on several issues but nonetheless he doesn’t support his impeachment motion.

“I may not agree with my brother Dr.Matiang’i on several lines of thought which is normal,but above everything else,he is my brother and am his home MP.
I have gone through the impeachment grounds fronted by Hon.MOHA this morning and I must say I am DISAPPOINTED .
Why would one want to impeach the CS over his dispute with his governor over some wall??

“If that is the ONLY REASON Moha has,then the motion FALLS FLAT even before admission in the house.On all other operations by the CS,he works UNDER INSTRUCTIONS and any sane grown-up should actually commend his loyalty to his boss,H.E the PRESIDENT.
Same way I don’t like ANY PERSON undermining me over my loyalty to Dr.WSR,I equally commend those that stand on their ground for what they believe in,be it Rt.Hon.Raila or even Jimmy Wanjigi or Wetangula.Kila mtu aruhusiwe afanye loyalty yake atakavyo.

“Back to Matiang’i.He is a CIVIL SERVANT for crying out loud.The president saw it fit to have him in that post and unless I see SERIOUS VIOLATION of the constitution on his part,I will NOT SUPPORT the imaginary impeachment by some of my colleagues.
Watu warudi ground wafanye kazi yao huko.Leave CIVIL SERVANTS ALONE..

“Those pulling my name on signature no.88,wacheni UJINGA.My name does NOT bear a ‘K’ anywhere and my constituency is NOT Kapseret..
Tuwache siasa duni.LET MATIANG’I be.If you consider him a ‘dog’,then know that the dog has its owners na ni sisi.

“I have shared with H.E Dr. WSR this morning over the same and found out that he is UNAWARE of such a motion and has committed to call upon MPs to focus on matters that touch on common mwananchi.In his words ‘it is not time for impeachments,its time to focus on serious legislative matters like NHIF and FUEL PRICES’…
Be ye informed accordingly..” Osoro wrote.