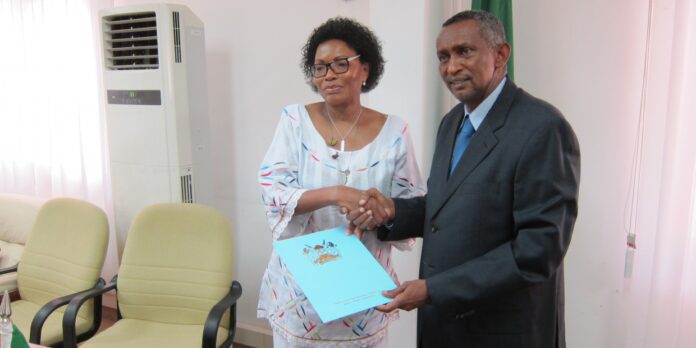 President Uhuru Kenyatta has rewarded his Cousin Ambassador Catherine Muigai Mwangi  as she has been nominated to High Commissioner’s post for Pretoria, South Africa.

But how well do you Ambassador Catherine Muigai Mwangi.

Before being nominated for the High Commissioner’s post for Pretoria, Mwangi served as  Kenya`s Ambassador Extra-Ordinary and Plenipotentiary to the Federal Democratic Republic of Ethiopia, the Republic of Djibouti and Permanent Representative to the African Union (AU), Inter-Government Authority on Development (IGAD) and United Nations Economic Commission for Africa (UNECA).

Ambassador Mwangi has vast professional experience having worked in Government and private sector specialising in corporate strategy development, marketing, communications, brand management, operations and personnel management. Throughout her career she has established an excellent network of contacts worldwide. Mwangi is able to develop positive working relationships with individuals from diverse backgrounds. She is passionate about the development of Kenya and the region, is focused on initiatives which build mutual beneficial partnerships to both countries.

Prior to her current appointment she served as the Ambassador of the Republic of Kenya to the Republic of Ireland from 2007 to 2014. She was Kenya’s first envoy to that country; during her tour of duty she was instrumental in promoting Kenya’s economic interests in Ireland. She also chaired the Africa Ireland Economic Forum which stimulated Africa-Ireland economic activities. Mwangi is also credited for profiling Kenya as both an investment and tourist destination and initiated partnership agreements between Kenya and Irish institutions of higher learning.
From 2005 to 2007 she was the Deputy Managing Director and Head of Marketing at the Kenyatta International Conference Centre (KICC) where she played key role in promoting KICC as the premier conference facility in the region.

From 2001 to 2004 she was Director; Corporate Communications at the Kenya Airways where she spear headed the development and implementation of the company communication policy and strategy.

Amb Mwangi was also the General Manager and the Chief Executive Officer of FEDEX East Africa in Nairobi where she established the FedEx franchise. From 1990 to 1994 she worked as marketing and sales manager at the Express Kenya Ltd and from 1983-1989 she worked at the Ogilvy& Mather EA Ltd in Nairobi.

The Ambassadors holds a Post Graduate Diploma in Mass Communication and a Bachelor of Arts Degree from the University of Nairobi.