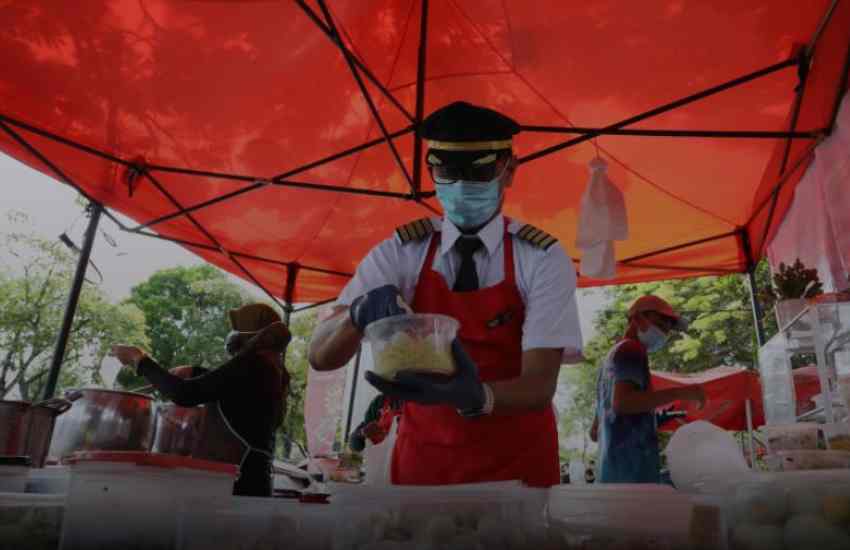 Every morning, Malaysian pilot Azrin Mohamad Zawawi puts on his white uniform and black captain’s hat before heading to work.

But rather than going to the airport, as he has done for two decades, he heads to a small noodle stall he now runs in a suburb just outside the capital, Kuala Lumpur.

Azrin, 44, is one of thousands of staff who have lost their jobs after airlines were grounded by the coronavirus pandemic. “I need some income because I was retrenched by my previous company,” said Azrin, whose most recent employer, Malindo Air, was forced to slash its workforce this month.

Deprived of a regular income, the father of four decided to start a food business, selling Malaysian dishes such as a curry noodle dish made from a family recipe, laksa, and a mixed fruit dish called rojak. His business got a surge of unexpected publicity when a photograph of Azrin wearing his captain’s uniform with a red apron taken by his wife and posted on social media went viral.

Still, customers say the business, aptly named “Kapten Corner” (“Captain’s Corner”), is more than just a gimmick. “The main thing is the food must be good…I’ve eaten here twice. The first time I brought my wife and now I bring my friends,” said customer Azman Yunus. Another customer, Syed Khadzil, also praised Azrin for finding a creative way to run a food business.

“The way he does business is also something unique – being creative with his uniform. It’s a crowd-puller,” said Syed. For his part, Azrin hopes his experience can inspire others affected by the pandemic to try new ways to make a living. “Embrace the challenge and never give up… It’s like flying the aircraft, we always move forward,” he said.