Cars Burst Into Flames On Mombasa Road Killing One, Injuring 4 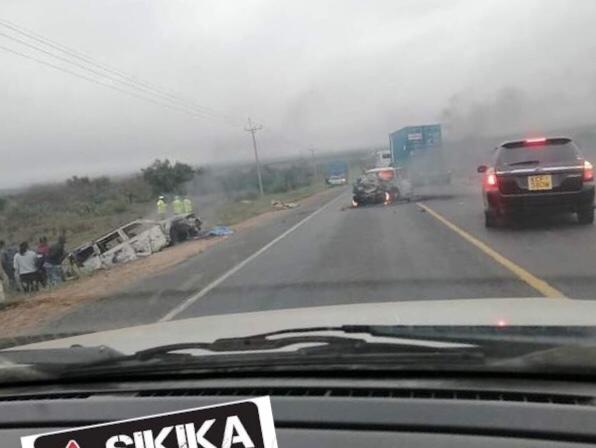 One person has been killed and four others injured following a grisly road accident involving three vehicles at Kapiti plains on Nairobi-Mombasa highway.

Two of the vehicles burst into orange flames after crashing trapping those on board.

With black smoke emanating from the vehicles, the passengers were rescued by other motorists who were dismayed by the happenings.

The injured were rushed to Machakos level 5 hospital.

Problem with night travel on our highways. Some motorists can't see.

The Nakuru – Mombasa Highway needs to have been dualled for safety. And it shouldn't be a toll road. https://t.co/56En6W9gJO

Police and witnesses say the early morning accident was out of driver error but investigators are handling it.

The incident caused a huge traffic snarl on the highway for hours as police cleared the flow.

Police have urged caution on the roads.

Any matatu operator, boda boda rider or motorists found riding, parking, or driving on non-motorised traffic corridors in the capital will have their licence revoked, the Nairobi Metropolitan Service has said.

The NMS Director-General Mohammed Badi yesterday revealed that road users had been acting in contravention of the traffic regulations by parking and riding on pedestrian walkways and cyclists’ pathways, thus putting many lives at risk.

“Any driver or rider found in contravention (of traffic regulations) will be prosecuted and their driving licence suspended, and where damage is occasioned to the infrastructure, the violator will pay for its restoration to previous condition,” said Badi.

RELATED POST:How Rustlers Laid An Ambush On Police Spraying Them With Bullets, Injuring 12