Aliou Cisse, The Man Who Led The Lions Of Teranga To Victory

The Senegal Football Team, the Lions of Teranga, claimed the Afcon2021 Title under the management of the head coach, Aliou Cisse.

The team emerged victorious after scoring 4 goals against Egypt’s 2  in  penalties after drawing in  a match that lasted 120 minutes. The Afcon finals were played in Cameroon.

Cisse has coached the lions of Teranga since 2015 but before that, he once led them in a caretaker role in 2012 briefly after the firing of Amara Traore.

Cisse was born on March 24, 1976. He began his football career as a teenager while in France. The footballer was born in Senegal but at the age of 9 his family moved to France.

The first Football Club he ever played for was Lille OSC. He later joined CS Sedan Ardennes before moving to PSG.

In the 2002/2003 season, he joined the Premier league after being signed by Birmingham City. By the end of the season, he had accumulated 10 yellow cards and he also suffered an injury that saw him out of the game for some time. The differences he had with the Birmingham manager saw him get sold to Portsmouth on a two year contract and in 2006 he returned to CS Sedan.

Cisse later went to play in the French Ligue 2 in 2008 and retired in 2009 at the age of 33 years  after which he enrolled for coaching classes.

Cisse also played for the Senegal Football team and while he was the captain, the team managed to get to the FIFA World Cup finals in 2002. 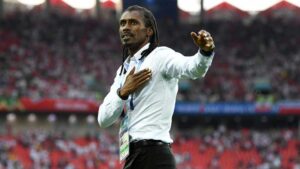 The Afcon2021 victory was a great achievement for Cisse, who could be seen shedding tears of joy. Senegal football team had never won the Afcon title since the team entered the championship in 1965 and the closest they have ever come to winning was becoming position two in 2002 and in 2019.

“It just shows that if you work hard, if you persevere, you will get what you want. I am very emotional because the people of Senegal have wanted this trophy for 60 years,” Cisse said .

The football team has so far won 41 matches, 8 loses and 14 draws in 63 matches under the management of Cisse.