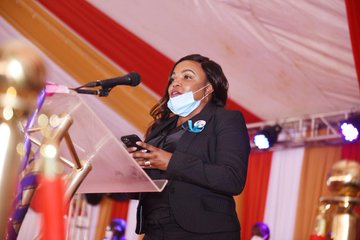 Ngirici claimed that David Murathe was no longer advancing Jubilee’s interests but those of the former prime minister’s party, ODM.

She added that they are not in Jubilee by intimidation but by their loyalty and conformity.

“We are in Jubilee not by intimidation and naysays but by loyalty and conformity. The radical propagandists led by the conman whistle blower David Murathe should exit the party and join ODM. Those who are saying we should leave Jubilee did not help the party in anyway. We formed this party and went around the country in search of votes. They joined us only to cause disunity,” Ngirici stated.

We are in Jubilee not by intimidation and naysays but by loyalty and conformity. The radical propagandists led by the conman whistleblower David Murathe should exit the party and join ODM.#sisi_sote. pic.twitter.com/IvhRmjhb9U

This comes as the rift in the ruling party continues to grow with both the President’s camp and Ruto’s camp calling on each other to break out from Jubilee.

In a recent exchange between Ruto and Murathe, DP stated that it was ludicrous the Jubilee official was still holding position within the party ranks instead of “pack and go” to Orange House, same words echoed by Ngirici.

“Those at Jubilee House who have decided that their presidential candidate is from Orange House should pack and go; what are they still doing at our party’s head office? Bado mnatuongelesha nini? (why are you engaging us?). My friend, this is a democratic country. If you have chose that your candidate is in Orange House, do the honorable thing, walk out of Jubilee, go to Orange House. We shall meet at the ballot,” he said.

In response, Murathe noted Ruto had authored his own miseries and was a victim of his making thankless to his aggressiveness and impatience.

“What is he waiting for? Let him take a walk. We are not bothered. Had he been patient, president Kenyatta would have led his campaigns in 2022. Now his restlessness has spoiled for him. We started seeing him from afar and noted that he did not have an iota of patience,” he claimed.