Tangatanga Wars – Moses Kuria Vs Rigathi Gachagua, Kimani Ngunjiri Vs Susan Kihika: Why Ruto Allies Are Fighting Each Other 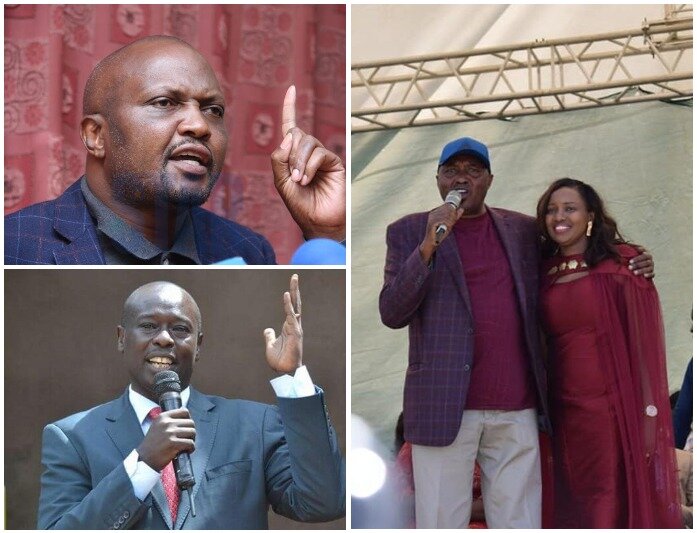 Tangatanga MPs from Mt. Kenya region have caused an implosion within DP William Ruto’s camp as they engage in vicious fights among themselves because of selfish interests.

Ruto has maintained that UDA will not seek alliances with other political parties causing him to be at loggerheads with the likes of Kuria and Mwangi Kiunjuri who are unwilling to fold their parties to join UDA.

Shortly after Kuria registered Chama Cha Kazi in August this year, Gachagua was quick to dismiss the Gatundu MP saying he was not representing the interests of Mt. Kenya people.

Kuria maintains that he supports Ruto’s presidential bid even though he refuses to join UDA as a party member.

UDA claims Chama Cha Kazi candidate Milton Mwenda Kabobo, who was cleared by the IEBC to vie for the ward’s seat, has not resigned as a clerk at the county government of Meru.

Ruto ally Meru Senator Mithika Linturi said that Kabobo and his party Chama Cha Kazi had breached the 2010 constitutional requirement that stipulates that every leader who wants to contest for a political seat must resign from public service.

Linturi says Kabobo is still under the payroll of Meru county Assembly.  While responding to the UDA claims, the Chama Cha Kazi lawyer said Ruto’s party, which has fronted Simon Kambi, has sensed defeats in the by-elections thus moving to court trying.

Nakuru Senator Susan Kihika and Bahati MP Kimani Ngunjiri’s row first played out in May this year as the two Tangatanga politicians quarreled and made accusations against each other.

On May 22nd, Kihika called out Ngunjiri claiming he was indecisive and unsure of which camp to support and further said he betrayed the DP by voting for BBI in parliament.

“One also needs a little intelligence when spreading propaganda. Kimani is peddling lies just to get the attention of someone he ran up and down the streets insulting a few months ago (Uhuru). Didn’t he just vote yes for the Constitutional Amendment Bill 2020 (BBI) that he campaigned against for the last two years?

“Who would dare trust this man who blows hot and cold every other day? For me it spells an unreliable, character who switches sides depending on where his bread is being buttered that evening,” Kihika lashed out at Ngunjiri.

Ngunjiri on his part had claimed in a press conference that Kihika was among a set of leaders planning to frustrate President Uhuru Kenyatta once he retires from office.

“My friend, politics is not about you but Nakuru residents. We want to respect the President and allow him to drink tea at State House with his successor. How can you disturb the President’s peace? Try and you will see my wrath as I won’t allow Nakuru residents to be divided, “Ngunjiri stated.

Fast forward to September, Ruto hosted a delegation from Nakuru county at his official residence in Karen on Thursday September 2nd.

The delegation included grassroots leaders from Nakuru county and leaders from the county led by Nakuru senator Susan Kihika.

Ngunjiri attacked Kihika for excluding him from DP Ruto’s meeting at Karen, he further claimed the delegates she took to the DP were not grassroot leaders.

The infighting within Ruto’s camp has elicited claims that the MPs are just supporting the DP for their own selfish gains. 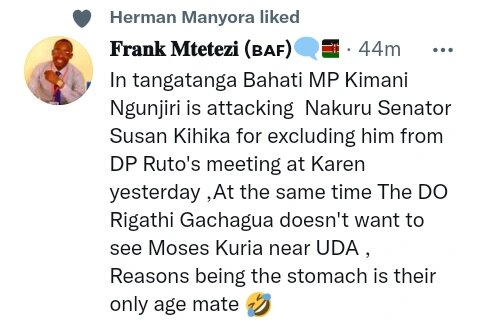 Related: Moses Kuria blasted for leaking conversation with a Journalist