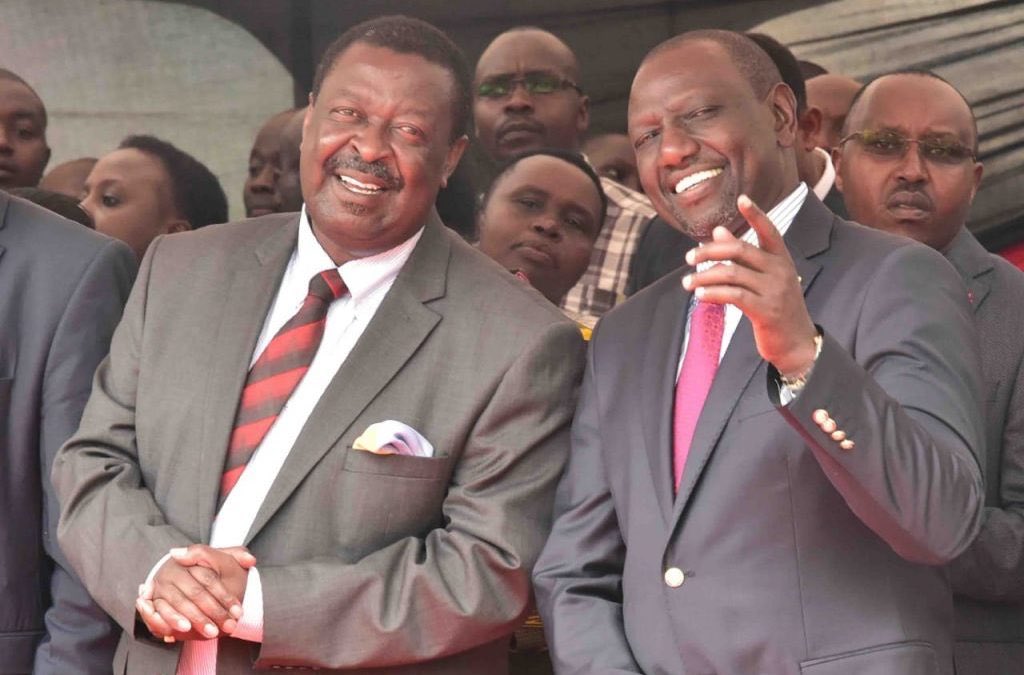 A possible political union is brewing between Deputy President William Ruto, Musalia Mudavadi, and Senator Moses Wetang’ula after a technical team was created on Friday to spearhead the union.

There were two separate meetings were convened at both DP Ruto’s residence and another at ANC boss offices with close sources indicated there was no doubt on the extent of the coordination that went into the planning.

“The meeting brought Jubillee ( the Tangatanga wing), ANC, and Ford Kenya together. We have agreed to join forces to address the challenges facing our people. We have been treated badly and it is time this changed,” Mumias East MP Ben Washiali said.

Mr. Washiali has however warned that the name of the DP will not appear in the larger scheme and the committee will report to the principals on the way forward before the end year.

According to Daily Nation, the MPs said they are accompanied by a far-reaching announcement by the principals.

Kimilili MP Didmus Barasa said there was no looking back in the process given the tribulations Deputy Ruto is facing in the ruling party.

“We’ll forward two names of those from the Jubilee side who will represent us in the committee,” he said.

The meeting was billed as one to bring all Luhya leaders to speak in one voice on matters affecting the Ingwe Nation, but the Ruto factor eroded the meeting.

Now that the marriage between Rift Valley and Mount Kenya is on ICU, Ruto is now counting on Luhya’s support to propel him to the State House.

At his official residence, DP Ruto gave his team his blessings to meet with Mr. Mudavadi in what some of his allies now say was a way of telling the world that the man from Sugoi is not out of political options.

“The boss asked them to talk to Mudavadi and Wetang’ula and explore ways of working together going forward. He appreciates the fact that time is of the essence,” a source at Dr. Ruto’s office told Daily Nation.

At the moment there are political realignments taking place within the country. President Kenyatta and ODM leader Raila Odinga are currently working together in the name of a handshake and are planning political mergers.

ANC leader Musalia Mudavadi and Ford Kenya party leader Wetang’ula who was Raila’s colleagues in the last elections, seems to have had enough of him. The two have in the past accused Raila in the past for being a bully and selfish.

Sources say that should Ruto be convinced that the forced out to stop his presidential bid were too strong, He may look for different grounds and front someone else for the residence in the hope that the laws will be changed to make a position of executive prime minister. Ruto will opt for a shot through Parliament.

There is planned elders’ meeting in Vihiga this weekend which will be attended by Kakamega Governor Wycliffe Oparanya and Devolution Cabinet Secretary Eugene Wamalwa a move that has sent shockwaves across the Luhya nation.

The meeting at the ANC party leader office was hosted 23 MPs from Western and it is believed to counter the planned Vihiga meeting.

Governors from the four Western counties are expected to attend the Vihiga meeting.

Musalia Mudavadi has however claimed that the meeting at his office had nothing to do with politics but about economic empowerment of the region.

“We note with profound concern that the sugar industry, which has been the mainstay of our economy in Western Kenya, remains marginalized.

We are left wondering whether this is a factor of the state giving up on the industry, or is it erroneous human omission, or deliberate marginalization. This must be corrected immediately,”,” Mr. Mudavadi said.

North Korea’s Kim Jong-un in a coma ,Kim Yo Jong is poised to take nation