More
HomeNewsOKA Principals Reveal That They Are Being Forced To Back Raila Odinga's... 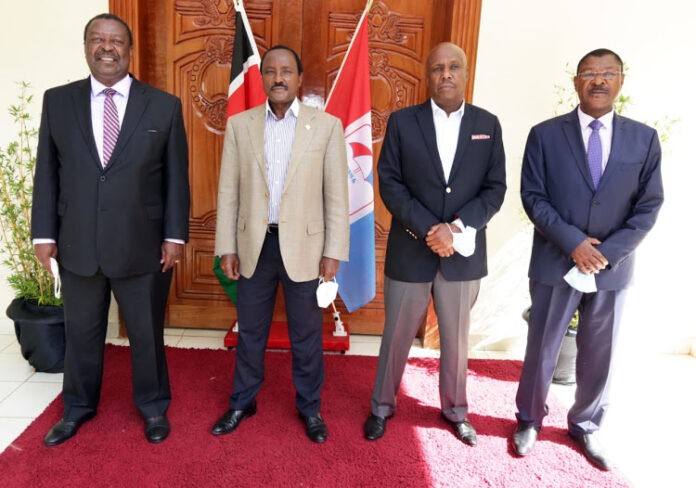 One Kenya Alliance principals have maintained that they will not support Raila Odinga in the coming General Elections.

The principals namely Musalia Mudavadi of ANC, Kalonzo Musyoka (Wiper), Moses Wetang’ula (Ford Kenya) and Gideon Moi of KANU revealed that they are being forced to support the former prime minister.

This comes after a meeting with president Uhuru Kenyatta on Saturday October 30, whereby they discussed the campaign’s way forward.

Speaking in Githurai on Sunday, the principals said they will not be intimidated into supporting any presidential aspirant in the 2022 elections.

“It is Kenyans who have the power to pick the leader they want. Let us forget the propaganda being peddled around in order to force some of us to support someone. I have said this before and I will repeat everywhere I go. Leadership comes from the people and the people must decide,” Mudavadi stated.

According to ANC’s deputy party leader, Ayub Savula, the Saturday’s meeting intended to persuade the four leaders to support Raila.

“There is a meeting with OKA leaders at the State House because these are people who represent political parties, they have to consult. There is an issue of convincing and as Uhuru said before, opposition leaders have to unite because they have a common enemy but it is just an appeal, he cannot force them to support a particular person,” stated Savula.

OKA principals announced on Friday in Kakamega town that they are set for the nationwide presidential campaigns.

The leaders also revealed that they will unveil their flag bearer in two months time.

Their campaigns have so far been centered on promises to reduce tax by up to 50%, reviving industries, channeling more resources to the grassroots and unity and repaying the county’s debts within two years.

RELATED STORY: 2 Of The 4 OKA Principals Throw In Towel And Decide To Support Raila