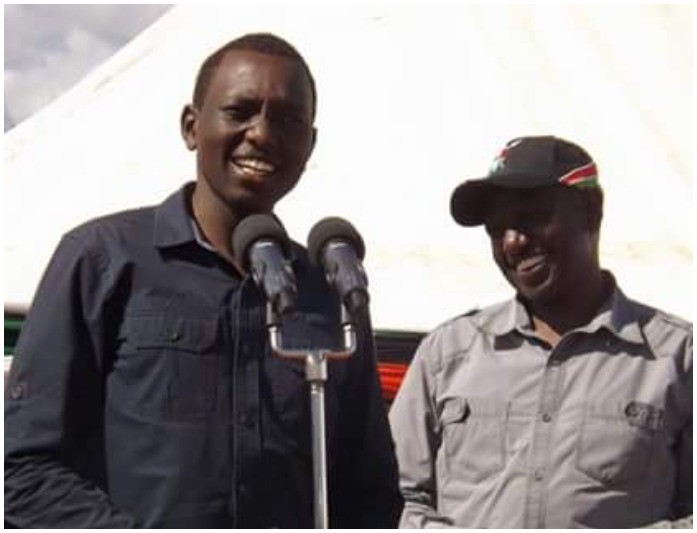 Nick has not joined politics outright but has been attending private functions and commenting on politics on social media.

His latest post on Facebook was a blatant attack directed to Raila who is giving his dad a run for his money in the 2022 presidential race.

Nick mocked the ODM leader saying his father will still beat him hands down in 2022 even if he form alliance with OKA principals.

Ruto’s son said his dad only needed Uhuru to beat the five Nasa principals in past election and that Raila was desperately trying to seeking six other principals to beat the DP in 2022 – a plan which Nick said will fail terribly.

“He needed one man (😎 to beat 5 principals. But today, he is desperately organizing 6 principals to defeat the same one man,B. This one man will mercilessly beat them in the ballot. Some struggles are too hard😂,” Nick Ruto wrote. 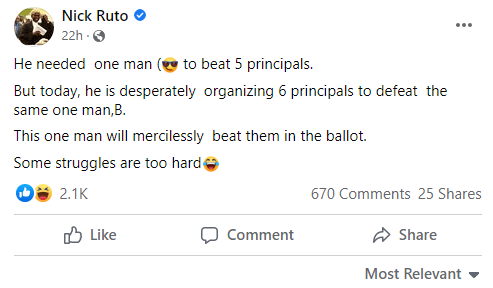 Nick Ruto’s heightened political activities are seen as a strategy to mobilize support for his father ahead of 2022 elections.

Nick, a lawyer-cum-businessman, has been making public appearances mainly in church harambees ostensibly to raise funds, but which he frequently uses to rally support behind his father.

In October 2019, Nick Ruto raised eyebrows when he attended a fundraiser in Raila’s Bondo backyard. In a well-crafted scheme, Nick was in Rarieda for a fundraiser in aid of Nyamasore Catholic Church.

Nick Ruto is working on an initiative to reach out to youth in regions perceived to be hostile to his father’s 2022 presidential bid – he visited both Nyanza and Coast which are Raila’s strongholds.

The initiative by Ruto’s son runs parallel to his father’s political campaign and targets millennial generation – born between 2000 and 2004 after the multiparty era – who have little idea of Raila’s role and sacrifices in the clamor for multi-party democracy in Kenya.

The shy lawyer-cum-businessman was actively behind-the-scenes before he became increasingly visible in public functions and on social media.

Nick has accompanied his father to some forums and this has led to talks he may enter politics to vie for a seat in Uasin Gishu county in future.

Related: “Excuse Me Am Talking To You Your Excellency” Webuye Man Confronts Ruto Over Unfulfilled Promises