My Ears Were Blocked After 25 Km – Kipchoge Says 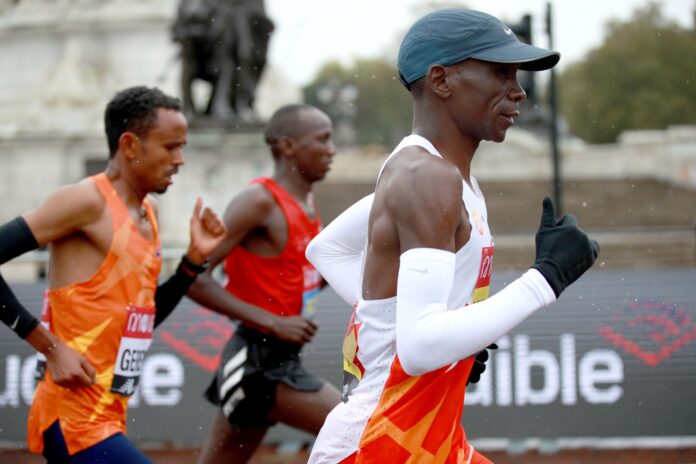 Eliud Kipchoge was on Sunday beaten in the London Marathon as Ethiopia’s Shura Kitata won in a thrilling sprint finish to claim the gold medal.

Four-time winner Kipchoge was the race favorite but fell behind with two laps remaining and ended up finishing eighth.

Kitata pushed ahead of Kenya’s Vincent Kipchumba on the home stretch to finish in two hours five minutes and 41 seconds.

Speaking after the race Kipchoge said he was disappointed with his result and couldn’t understand what happened during the gate.

“I am really disappointed,” Kipchoge said. “I don’t know what happened.

“The last 15km, I felt my right ear was blocked. I had a cramp in my hip and leg.

“It just happened in the race. I started well. It’s really cold but I don’t blame the conditions.”

The race was supposed to be a straightforward victory for the Kenyan international with Kenenisa Bekele pulling out of the race on Friday.

But the defending champion who set a world record of 2:01:39 inn 2018, never capitalized on the opportunity to clinch an eight-strong leading pack in a slow start.

Kitata pushed the race with 15 minutes remaining while Kipchoge was increasingly uncomfortable as he dragged behind.

Others dropped off and eventually Kitata rounded the final corner into the home stretch with compatriot Sisay Lemma and Kipchumba.

The Ethiopian managed to surge ahead and finished a second ahead of Kipchumba, with Lemma three seconds further behind.

“I prepared very well for this race,” Kitata said. “Kenenisa Bekele helped me. I am very happy to win the race.”