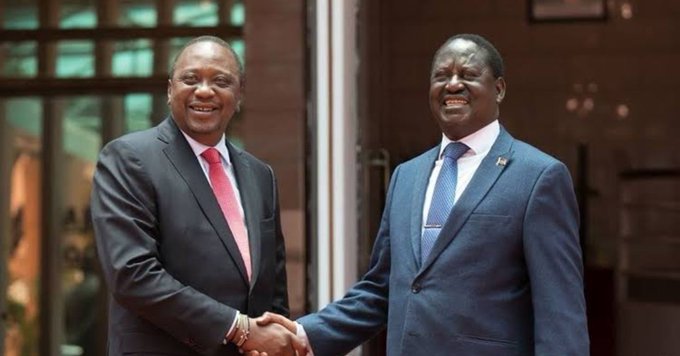 MPs have passed a crucial Bill allowing President Uhuru Kenyatta and ODM leader Raila Odinga to take control of the Independent Electoral and Boundaries Commission (IEBC) ahead of the 2022 elections and a possible referendum next year.

On Thursday evening, just before the legislators broke off for recess, they passed the IEBC (Amendment)(No 3) Bill 2019, which gives the Parliamentary Service Commission (PSC) majority four slots in the seven-member panel to appoint electoral commissioners. This effectively places the process in the firm grip of the two Handshake partners.

Allies of Uhuru and Raila currently hold key positions in the House, which means the move has handed them a blank cheque on composition of the electoral body that will conduct the 2022 General Election and the expected referendum under the Building Bridges Initiative (BBI).

Once the president picks names from a list presented by the selection panel and forwards them to Parliament, the Justice and Legal Affairs Committee, also controlled by Uhuru and Raila, will vet the nominees and present a report to the House.

The BBI reforms, a product of the March 9, 2018 political truce between Raila and the president, are opposed by Deputy President William Ruto, who is the greatest casualty in Thursday’s events in Parliament.

The Law Society of Kenya (LSK) and the Inter-religious Council of Kenya are the other bodies that will nominate members to the panel; but with only three slots between them, they will be mere passengers in the IEBC selection team.

“A person is qualified for appointment as a member of the selection panel if such person — is a citizen of Kenya; meets the requirements of leadership and integrity set out in Chapter Six of the Constitution; and holds a degree from a university recognised in Kenya.”

The amendments were originally introduced by the Senate and received the backing of the National Assembly on Thursday.

Respective Justice committees – dominated by Uhuru and Raila’s allies – shepherded the proposals through the two Houses, representing the first fruits of the purge that early this year ejected allies of Ruto from influential positions in Parliament.

The Bill will now proceed to the president for assent, setting the stage for the appointment of new commissioners to replace those who resigned in the wake of the contested 2017 elections.

National Assembly Justice and Legal Affairs Committee Chairman Muturi Kigano said the Bill, once signed by the president, into law will clear the way for a referendum and cushion the country against a constitutional crisis.

“The amendment may look small but it has very wide ramifications in our governance and society. If for example, there was to be any vacancy in the composition of IEBC as it is today, we will have constitutional disorder. That is what the amendment has come to cure. This is the route for the BBI and any other future amendments and voice of Wanjiku to be heard,” said the Kangema MP.

Committee Vice-Chair Otiende Amollo said the move will allow Parliament to fill the four vacancies at IEBC and clear the way for the departure of the three sitting commissioners.

Majority Leader Amos Kimunya urged the House to pass the Bill “to clear the way for other processes that affect the IEBC so that the credibility of the electoral body can become clear.”

Limuru MP Peter Mwathi asked MPs to support the Bill “so that we can protect our institutions”.

Speaker Justin Muturi had risen ahead of debate to warn members of the consequences of rejecting the amendments as it would have resulted in a long drawn mediation process between the Senate and the National Assembly. In the circumstances the Bill would have been lost.

Thousands of people have ignored a curfew imposed in Minneapolis to protest for the fourth night in a row, as citizens protest police brutality...
Read more
- Advertisement -
Celebrity