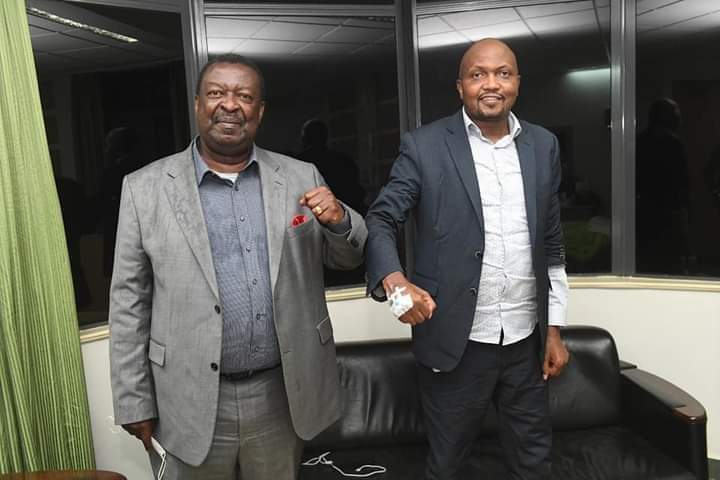 Kenyans have raised a lot of questions after ailing Gatundu South MP changed his attire after ANC party leader Musalia Mudavadi visited him at the hospital.

Taking to his Twitter page, Musalia revealed that he visited the controversial MP at Karen hospital, on Tuesday morning, where he is currently receiving treatment.

At the time of Mudavadi’s visit, Moses Kuria was dressed in a suit. Just a few hours after Mudavadi had left the hospital, ODM leader Raila Odinga also went into the hospital to check on Kuria.

During Raila’s visit, Kuria was spotted in different attire. This time around the lawmaker was dressed in casual clothes. He was wearing jeans and a Gor Mahia jersey – a team normally associated with Raila.

Kenyans on Twitter suggested that Kuria’s move to wear Gor’s jersey was an indication that he might join Raila Odinga’s side in his quest to clinch the country’s presidency. Others noted that the MP was ready to dump Deputy President William Ruto’s camp and join Raila’s camp.

Other than the cloth that Kuria was wearing, some KOTs noted that Raila was kind-hearted and had no political enemy.

Here are some of the reactions of Kenyans online:

Oyuko: Get Well Moses Kuria. We need you in Canaan the land of Milk and Honey.

Lilian London: Moses Kuria is wearing a Gor Mahia top; is he ready to come back home? Over to you political Analysts.

Sam Wamalwa: Hon Moses Kuria is still sick and needs our prayers, we need his positive contribution in Kenyan politics, Raila Odinga has no political enemy.