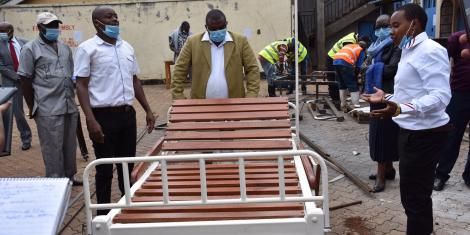 The man who was awarded the tender to deliver 500 hospitals much to the chagrin of many Kenyans is a well-known politician from Kiambu County.

In fact according to sources, he might have colluded with individuals at the PDU Secretariat to influence the awarding of the tender.

The man in question is Solon Gathongo Mungai who vied for Kiambu senatorial seat in 2017 elections. And yes, Solomon confirmed to  local publication that he is a member of Jubilee party and vied for a seat but he doesn’t believe any of that influenced the warding of the tender which is set to make him millions of shillings.

“Yes, its true I vied for the senatorial seat in 2017 but I did not make it to the ballot. As a youth, I was trying it out and things didn’t go well for me, I dropped out at the primaries,” he said adding that he had been selling sanitisers and face masks prior to opening a workshop.

Said he, “I was working selling sanitisers and face masks, but then I found the market had been saturated and that is when we thought of the hospital beds came to my mind because they were in high demand,”

According to him started his business over three weeks ago and when he posted his first bed on social media but people could not comprehend what he was making because it was in its early stages. He said he had posted his beds on his Facebook page and he had no idea there was another artisan making similar beds. “I only realized three days later after I had posted my beds on my Facebook page, Meshack’s video came later after I had posted my beds,” he said.

Yesterday, Kenyans were disappointed when they learned that the order by President Uhuru Kenyatta to procure 500 beds had been given to a different group of youthful innovators led by Mungai Gathogo and Joseph Muhinja based at Githunguri in Kiambu county and not Meshack Otieno whose innovation had gone viral. 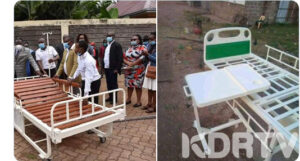 To many Kenyans on social media, this was an act of raw tribalism blaming Mechack’s last name for the misfortune that befell him.

Controversial former presidential candidate Mwalimu Dida was among the first to fire the salvo indicating that he has henceforth adopted a Kikuyu name.

“I am officially Mwalimu Kinuthia Mwangi. I think that using a Mwangi or Kinuthia name is the only way to get recognition from the government. This breaks my heart. If the Kikuyu community doesn’t stand with Kenyans against blatant tribalism, they will suffer the same one day,” he tweeted.

To his shock, Mr Otieno himself had no idea the president had given out the tender to a different group of innovators, and that he had been trending all day in social media.

“I have not been given any order by anybody. Yes, I do work with seven guys but today we are only four of us and we have not been visited by any government official,” he said.