Eudoxie Yao Apologizes, Vows Never To Sit On Grand P Again After She Dislocated His Hips 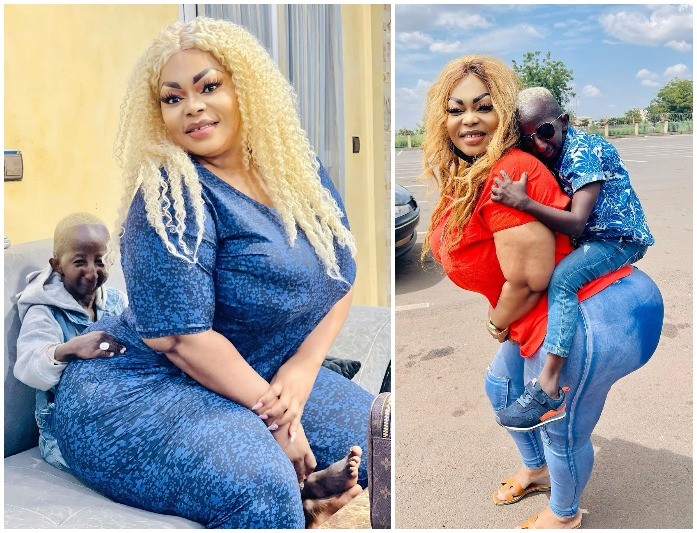 Eudoxie Yao raised a furore after she sat on Guinean dwarf tycoon Grand P causing him to suffer hip dislocation that saw him seek treatment in hospital.

In a video shared on social media, Eudoxie Yao was seen grinding on her little sweetheart as they enjoyed their romantic moment together.

It was gathered that the incident Grand P started feeling pain and it got worse with time as he complained of having difficulty standing up.

The Guinean celebrity tycoon was ultimately rushed to hospital for checkup and treatment after he could not stand or walk.

Grand P was hospitalized at Metro hospital in Guinea and it was revealed that his hip was dislocated because of the pressure his plus size sweetheart exerted on him.

Well, Grand P is now fine and Eudoxie Yao has apologized to Guineans for the pain she caused the dwarf celebrity tycoon.

Yao shared a video of herself carrying Grand P on her back and vowed never to sit on him again, stating that she will be the one carrying him instead.

“Guineans don’t get angry I put my baby on my back,” Yao captioned the video.

In another post, Yao promised Grand P’s fans that she will take good care of him until he fully recuperates.

“Don’t worry my king, I will continue taking care of you until you get well,” Eudoxie Yao posted.

The two lovebirds continue to demonstrate that they are happy together despite public anger over the pain and suffering that Eudoxie Yao caused Grand P.

Related: Grand P Suffers Hip Dislocation Weeks After His Plus Size Sweetheart Sat On Him