Esther Passaris Badly Trolled For Comparing Herself To Kamala Harris 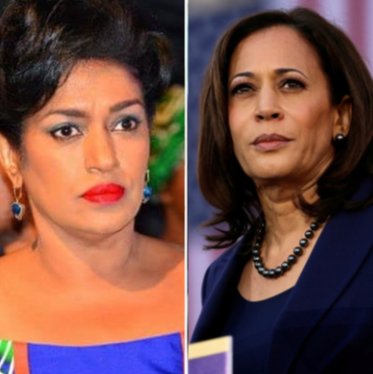 Nairobi Women Rep Esther Passaris is on the receiving end after Kenyans trolled her for comparing herself to USA Vice President-Elect Kamala Harris.

On Monday, November 9, 2020, Esther Passaris tweeted that one of her coaches had introduced her to the political career of Ms Harris.

Here’s what she wrote: “A few years ago my persuasion coach @JulietErickson_ said I reminded her of a US Senator called @KamalaHarris. I had no idea who she was, but I was told she had Presidential ambitions and that we were both born on 20th Oct 1964. So I started paying attention to Kamala’s career.”

She continued; “I had a sense of direction then. I have a sense of determination now. She inspires across borders. Thank you @JoeBiden for the vote of confidence in women. History was made because you wanted to be part of the change needed to right historical wrongs. A true #HeForShe Champion.”

However, Kenyan on Twitter turned against her and took the moment to troll her.

Kenyans have bashed her telling her that they only compare in complexion but not mental wise. 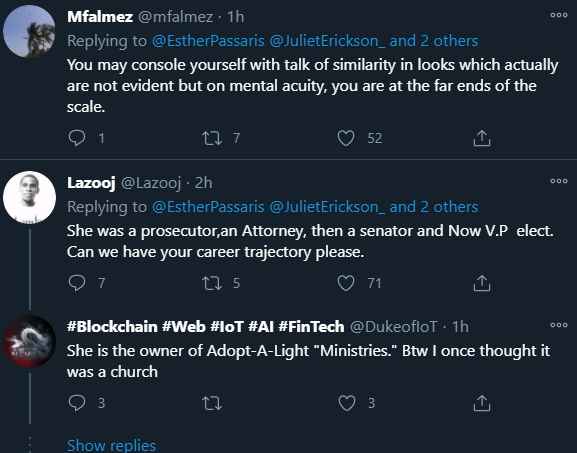 Kamala Harris was born October 20, 1964, Oakland, California, U.S. and she is an American politician who was elected to the U.S. Senate as a Democrat in 2016 and began her first term representing California in that body the following year. 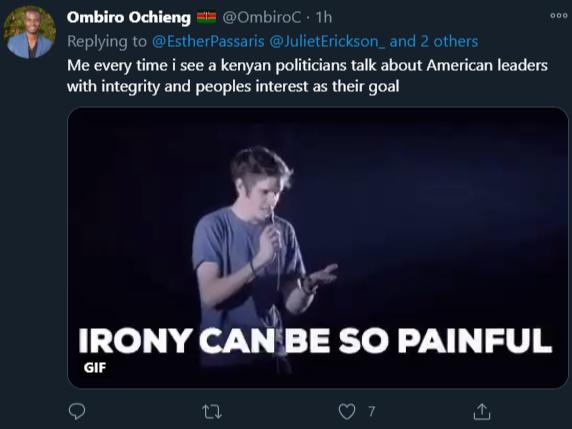 She was the first Indian American to serve as a U.S. senator as well as the second African American woman.

Harris previously was the state’s attorney general (2011–17). In November 2020 she was elected vice president of the United States on a ticket with Joe Biden. 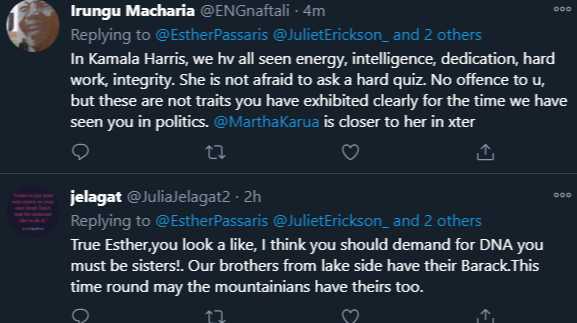 Her father, who was Jamaican, taught at Stanford University, and her mother, the daughter of an Indian diplomat, was a cancer researcher. Her younger sister, Maya, later became a public policy advocate.

She subsequently worked as a deputy district attorney (1990–98) in Oakland, earning a reputation for toughness as she prosecuted cases of gang violence, drug trafficking, and sexual abuse.

Harris rose through the ranks, becoming district attorney in 2004. In 2010 she was narrowly elected attorney general of California—winning by a margin of less than 1 percent—thus becoming the first female and the first African American to hold the post.

Her refusal to defend Proposition 8 (2008), which banned same-sex marriage in the state, helped lead to it being overturned in 2013.

With these qualifications, Kenyans called out Esther Passaris for not doing enough to be compared to Harris in the political realm.